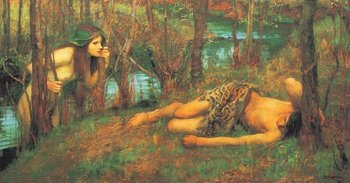 A Naiad by John William Waterhouse, 1893

In Greek mythology, the Naiads were a type of nymph who presided over fountains, wells, springs, streams, and brooks, as river gods embodied rivers, and some very ancient spirits inhabited the still waters of marshes, ponds and lagoon-lakes, such as pre-Mycenaean Lerna in the Argolid.

From the Greek νάειν, "to flow," and νἃμα, "running water".

Water Naiads were associated with fresh water, as the Oceanids were with saltwater and the Nereids specifically with the Mediterranean; but because the Greeks thought of the world's waters as all one system, which percolated in from the sea in deep cavernous spaces within the bosom of the earth, to rise freshened in seeps and springs, there was some overlap. 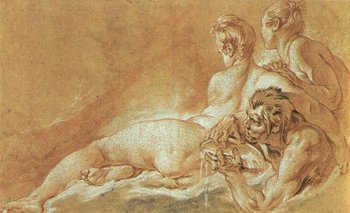 The Naiads were either daughters of Zeus or various Oceanids, but a genealogy for such ancient, ageless creatures is easily overstated. The water nymph associated with particular springs was known all through Europe in places with no direct connection with Greece, surviving in the Celtic wells of northwest Europe that have been rededicated to Saints, and in the medieval

Naiads were supposed to know the future and to foretell humans their destiny. Aristaeus had more than ordinary mortal experience with the naiads: when his bees died in Thessaly, he went to consult the naiads. His aunt Arethusa invited him below the water's surface, where he was washed with water from a perpetual spring and given advice. A less well-connected mortal might have drowned, being sent as a messenger in this way to gain the advice and favor of the naiads for his people.

Naiads were not bound to rivers and lakes even if the very essence of a naiad was bound to her spring. Just like the salmon fish, Arethusa, the nymph of a spring, could make her way through subterranean flows from the Peloponnesus, to surface on the island of Sicily. the.

If a naiad's body of water dried, she died.

Naiads could be dangerous: Hylas of the Argo's crew was lost when he was taken by naiads fascinated by his beauty (illustration, above right). The naiads were also known to exhibit jealous tendencies. Theocritus' story of naiad jealousy was that of a shepherd, Daphnis, who was the lover of Nomia; Daphnis had on several occasions been unfaithful to Nomia and as revenge she permanently blinded him.

They were often the object of archaic local cults, worshipped as essential to fertility and human life. Boys and girls at coming-of-age dedicated their childish locks to the local naiad of the spring. In places like Lerna their waters' ritual cleansings were credited with magical medical properties. Animals were ritually drowned there. Oracles might be sited by ancient springs.

When a mythic king is credited with marrying a naiad and founding a city, Robert Graves offers a sociopolitical reading: the new arriving Hellenes justify their presence by taking to wife the naiad of the spring, so, in the back-story of the myth of Aristaeus, Hypseus, a king of the Lapiths wed Chlidanope, a naiad, who bore him Cyrene. In parallels among the Immortals, the loves and rapes of Zeus, according to Graves' readings, record the supplanting of ancient local cults by Olympian ones (Graves 1955, passim). eral occasions been unfaithful to Nomia and as revenge she permanently blinded him.

Though Walter Burkert points out, "When in the Iliad [xx.4 - 9] Zeus calls the gods into assembly on Mount Olympus, it is not only the well-known Twelve Olympians who come along, but also all the nymphs and all the rivers; Okeanos alone remains at his station," (Burkert 1985), Greek hearers recognized this impossibility as the poet's hyperbole, which proclaimed the universal power of Zeus over the ancient natural world: "the worship of these deities," Burkert confirms, "is limited only by the fact that they are inseparably identified with a specific locality."