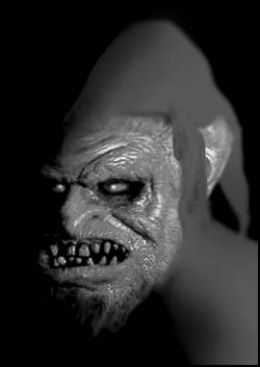 The Nain Rouge (French for red gnome) is a malevolent fairy creature that was initially reported in Normandy, France but reportedly emigrated to Michigan, USA.

The Nain Rouge originated in Normandy, France, as a type of goblin.

The Nain Rouge appears as a small child-like creature with red or black fur boots. It is also said to have "blazing red eyes and rotten teeth." (Skinner 1896)

The Nain Rouge is kind in his way to the fishermen, and often gives them valuable aid; but he punishes those who do not treat him with proper respect.

In a French fairy tale, Le Prince Lutin, written in 1697 has a description of the air, water and terrestrial lutin:

"You are invisible when you like it; you cross in one moment the vast space of the universe; you rise without having wings; you go through the ground without dying; you penetrate the abysses of the sea without drowning; you enter everywhere, though the windows and the doors are closed; and, when you decide to, you can let yourself be seen in your natural form.”

The Nain Rouge haunts Detroit, Michigan, United States and feared by its residents as "the harbinger of doom." (Skinner 1896) Its appearance is said to presage terrible events for the city.