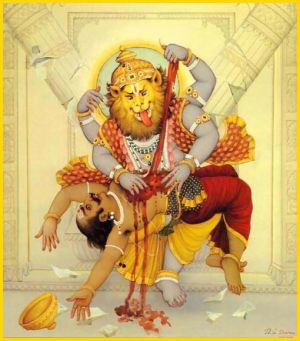 Narasimha with Hiranyakashipu on his lap

Narasimha (IAST Narasiṃha, Sanskrit नरसिंह), also spelt as Narasingh and Narasinga, is an avatara of Vishnu described in the Puranas, Upanishads and other ancient religious texts of Hinduism.

Narasimha's form is half-man/half-lion, having a human-like torso and a lower body, but with a lion-like face and claws.

Narasimha is known primarily as the 'Great Protector' who specifically defends and protects his devotees at the times of need.

There are nine main Narasimha deities, collectively known as Navanarasimha:

The story of Narasimha as described in the Bhagavata Purana is as follows:

In his previous avatara of Varaha, Vishnu killed a rakshasa known as Hiranyaksha. Hiranyaksha's brother Hiranyakashipu, greatly angered by this, started to abhor Lord Vishnu and his followers. To which end he decides to attempt to kill Vishnu by gaining mystical powers, which he believes Brahma, the chief among the devas will award him if he undergoes many years of great austerity and penance. This initially seems to work as planned with Brahma becoming pleased by Hiranyakashipu's austerities. Brahma thus appears before Hiranyakashipu and offers him a boon that he will personally make true anything he wishes for. In reply to which Hiranyakashipu requests the following:

"O my lord, O best of the givers of benediction, if you will kindly grant me the benediction I desire, please let me not meet death from any of the living entities created by you. Grant me that I not die within any residence or outside any residence, during the daytime or at night, nor on the ground or in the sky. Grant me that my death not be brought about by any weapon, nor by any human being or animal. Grant me that I not meet death from any entity, living or nonliving. Grant me, further, that I not be killed by any demigod or demon or by any great snake from the lower planets. Since no one can kill you in the battlefield, you have no competitor. Therefore, grant me the benediction that I too may have no rival. Give me sole lordship over all the living entities and presiding deities, and give me all the glories obtained by that position. Furthermore, give me all the mystic powers attained by long austerities and the practice of yoga, for these cannot be lost at any time."

One day while Hiranyakashipu was performing austerities at Mandaracala Mountain, his home was attacked by Indra and the other devas, seizing the opportunity in his absence. At this point the divine sage, Narada intervened in order to protect Kayadu, who he describes as 'sinless'. Following this event Narada takes Kayadu into his care and while under the guidance of Narada, her unborn child (Hiranyakashipu's son) Prahlada, became affected by the transcendental instructions of the sage even at such a young stage of development. Thus, Prahlada when later growing as a child began to show symptoms of this earlier training by Narada, gradually becoming recognised as a devoted follower of Vishnu, much to his father's disappointment.

Hiranyakashipu eventually becomes so angry and upset at his son's devotion to Vishnu (who he sees as his mortal enemy) that he decides he must kill him but each time he attempts to kill the boy, Prahlada is protected by Vishnu's mystical power. When asked, Prahlada refuses to acknowledge his father as the supreme lord of the universe and claims that Vishnu is all-pervading and omnipresent. To which Hiranyakashipu points to a nearby pillar and asks if 'his Vishnu' is in it:

"O most unfortunate Prahlada, you have always described a supreme being other than me, a supreme being who is above everything, who is the controller of everyone, and who is all-pervading. But where is He? If He is everywhere, then why is He not present before me in this pillar?"

Prahlada then answers, He was, He is and He will be. In an alternate version of the story, Prahlada answers He is in pillars, and he is in the smallest twig. Hiranyakashipu, unable to control his anger, smashes the pillar with his mace, and then following a tumultuous sound, Vishnu in the form of Narasimha appears from it and in defence of Prahlada moves to attack his father. In order to kill Hiranyakashipu and not upset the boon given by Brahma, the form of Narasimha was chosen. Hiranyakashipu could not be killed by human, deva or animal, Narasimha is neither one of these, as he is a form of Vishnu incarnate as a part-human, part-animal. He comes upon Hiranyakashipu at twilight (when it is neither day nor night) on the threshold of a courtyard (neither indoors nor out), and puts the demon on his thighs (neither earth nor space). Using his sharp nails (neither animate nor inanimate) as weapons, he disembowels and kills the demon. Kurma Purana describes the preceding battle between the Purusha and demoniac forces in which he escapes powerful weapon called, pashupata and it describes how Prahladas brothers headed by Anuhrada and thousands of other demons "were led to the valley of death (yamalayam) by the lion produced from the body of man-lion" avatara. The same episode occurs in the Matshya Purana 179, several chapters after its version of the Narasimha advent.

Even after killing Hiranyakashipu none of the present demigods were able to calm Narasimha's fury, not even Shiva. So all the gods and goddesses called his consort, the goddess Lakshmi, but she was also unable to do so. Then, at the request of Brahma, Prahlada was presented to Narasimha, and finally, he was calmed by the prayers of his devotee. Before parting, Narasimha rewards the wise Prahlada by crowning him king.

Based on this story, it is believed by followers that Narasimha protects his sincere devotees when they are in extreme danger. He saved Adi Sankara from being sacrificed to the goddess Kali by a Kapalika. Thus Adi Sankara composed Laksmi-Narasimha stotra.

A number of prayers have been written in dedication to Narasimha avatar. These include:

"O' Angry and brave Maha-Vishnu, your heat and fire permeate everywhere. O Lord Narasimha, you are everywhere. You are the death of death and I surrender to You."

"Lord Nrsimha is here and also there. Wherever I go Lord Narasimha is there. He is in the heart and is outside as well. I surrender to Lord Narasimha, the origin of all things and the supreme refuge." (Narasimha Pranama)Steven J. Rosen, Narasimha Avatar, The Half-Man/Half-Lion Incarnation

"O Kesava! O Lord of the universe. O Lord Hari, who have assumed the form of half-man, half-lion! All glories to You! Just as one can easily crush a wasp between one's fingernails, so in the same way the body of the wasplike demon Hiranyakasipu has been ripped apart by the wonderful pointed nails on your beautiful lotus hands." (from the Dasavatara-stotra composed by Jayadeva) Steven J. Rosen, Narasimha Avatar, The Half-Man/Half-Lion Incarnation

"O kamasikha Narasimha! you are sarva sakthan. When you are resolved to protect some one, where is the need to seek the protection of anyone else? When you are resolved not to protect some one, which other person is capable of protecting us?. There is no one. Knowing this fundamental truth, I have resolved to offer my saranagati at your lotus feet alone that rest at the banks of Vegavathi river." (Kamasika Ashtakam by Vedanta Desika)

"I will dance and melt for you, within my heart, to see you, I will sing in praise of you with tears in joy, I will search for Narasimha and I am a householder who still searches to reach you(to attain Salvation)." (Divya Prabandha) 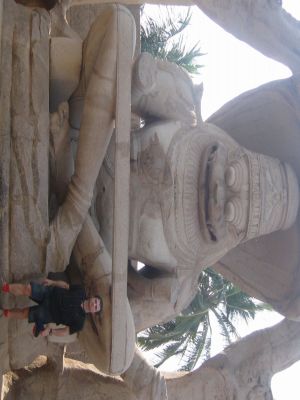 Ugranarasimha statue with devotee at Hampi