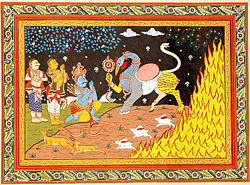 Arjuna Saluting Navagunjara - a Composite Figure (Krishna) During His Stay in Khandava Forest.

In Hindu mythology, Navagunjara is a creature composed of nine different animals.

The beast has the neck of a peacock, the back or hump of a bull, the waist of a lion, and the tail is a serpent.

The version of the Mahabharata, written by the Oriya poet Sarala Dasa, narrates the legend of Navagunjara, no other version has the story.

Once, when Arjuna was doing penance on a hill, Krishna-Vishnu emerges him as Navagunjara. Navagunjara has the head of a rooster, and stands on three feet, those of an elephant, tiger and deer or horse, the fourth limb is a raised human arm carrying a lotus or a wheel. Initially, Arjuna was terrified as well as mesmerized by the strange creature and raises his bow to shoot it. Finally, Arjuna realizes that Navagunjara is a manifestation of Vishnu and drops his weapons, bowing before Navagunjara. Arjuna Saluting Navagunjara - a Composite Figure (Krishna) During His Stay in Khandava Forest

The animal is a common motif in the Pata-Chitra style of painting, of the Indian state of Orissa.

The Navagunjara-Arjuna scene is sculpted at the northern side of the Jagannath Temple, Puri.