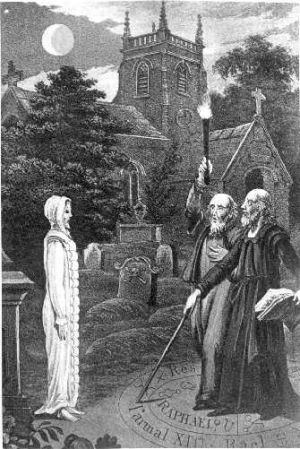 In this nineteenth-century illustration, John Dee (1527-1608), famous mathematician, philosopher, and astrologer for Queen Elizabeth, holds a torch while an adept necromancer consults with a spirit.

Necromancy (Latin necromantia, Greek νεκρομαντία nekromantía) is a form of divination in which the practitioner seeks to summon the spirits of the dead in order to gain knowledge of future events from them. These spirits are called Operative Spirits and Spirits of Divination. The word derives from the Greek νεκρός nekrós "dead" and μαντεία manteía "divination".

Necromancy most likely has a relation to shamanism, which calls upon spirits such as the ghosts of ancestors.

The historian Strabo (Strabo, xvi. 2, 39, νεκρομαντία) refers to necromancy as the principal form of divination amongst the people of Persia; and it is believed to also have been widespread amongst the peoples of Chaldea (particularly amongst the Sabians or star-worshippers), Etruria and Babylonia. The Babylonian necromancers themselves were called Manzazuu or Sha'etemmu and the spirits they raised were called Etemmu.

In the Odyssey (XI, Nekyia), Odysseus makes a voyage to Hades, the Underworld, and raises the spirits of the dead using spells which he had learnt from Circe (Ruickbie, 2004:24). His intention was to invoke the shade of Tiresias, but he was unable to summon it without the assistance of others.

There are also many references to necromancy in the Bible. The Book of Deuteronomy (XVIII 9–12) explicitly warns the Israelites against the Canaanite practice of divination from the dead. This warning was not always heeded: King Saul asked the Witch of Endor to invoke the shade of Samuel, for example.

Norse mythology also contains examples of necromancy (Ruickbie, 2004:48), such as the scene in the Völuspá in which Odin summons a seeress from the dead to tell him of the future. In Grogaldr, the first part of Svipdagsmál, the hero Svipdag summons his dead Völva mother, Groa, to cast spells for him.

The 17th century Rosicrucian Robert Fludd describes Goetic necromancy as consisting of "diabolical commerce with unclean spirits, in rites of criminal curiosity, in illicit songs and invocations and in the evocation of the souls of the dead".

Modern séances, channeling and Spiritualism verge on necromancy when the invoked spirits are asked to reveal future events.

Necromancy may also be dressed up as sciomancy, a branch of theurgic magic.

Necromancy is extensively practised in voodoo.

In the middle ages the literate members of society were either the Nobility or Christian clergy. Either of these groups may have been responsible for the propagation and ongoing practice of necromancy, even though it is forbidden in Christianity. It is apparent that necromancy was not a method of witchcraft. It may have been only available to the scholarly of Europe, because of the accessibility, language, knowledge and methods it employs. There are a few confessions of some Nobles or Clergy members professing a history of experience with necromancy, although these may well have been obtained under duress (cf. the Salem Witch Trials). Some suggest that Necromancy could have became a way for idle literate Europeans to integrate Hebrew and Arabic legend and language into forbidden manuals of sorcery.

The possibility exists that literate Europeans were the main forces simultaneously practicing and condemning necromancy. The language, execution and format of the rituals illustrated in the Munich Handbook (Kieckhefer 42–51) are strikingly similar to Christian rites. In a Christian exorcism, various demons and spirits are driven away by name, in the name of God, Jesus or the Holy Spirit. The spells of necromancy are very similar to these Christian rites (Kieckhefer 128–129) in their complete opposition. The distortion of the rites into spells is within the scope of Christian understanding at that time. Necromantic spells were mainly illusory or utility spells. Modern scholarship suggests that most were written with hopes that their utility would prove to be useful in acquiring a feast, horse, cloak of invisibility or perhaps just notoriety among others in the necromancy practicing clergy. The nature of these spells lend themselves to being understood as underground clergy members deviantly indulging in unlawful pleasures.

The rare confessions of those accused of Necromancy suggest that there was a range of spell casting and the related magical experimentation. It is difficult to determine if these details were due to their practices, as opposed to the whims of their interrogators. John of Salisbury is one of the first examples related by Kieckhefer, but as a Parisian ecclesiastical court record of 1323 shows, a “group who were plotting to invoke the demon Berich from inside a circle made from strips of cat skin,” were obviously participating in the church’s definition of “necromancy.” (Kieckhefer, 191)

The probable reason that these renegade so-called Necromancers were dabbling in the dark arts is that the evolution of "natural" magic and "spiritual" magic was slow. Caesarius of Arles (Kors and Peters, 48) entreats his audience to put no stock in any demons, or “Gods” other than the one true Christian God, even if the working of spells appears to provide benefit. He states that demons only act with divine permission, and permitted by God to test Christian people. Caesarius does not condemn man here; he only states that the art of necromancy exists, although it is prohibited by the bible. Within the Rawlinson necromantic manuscript, a fable is presented as a warning to those that would perform necromancy, although the story ends with a note of physical trial, but without mention of the ramifications in the afterlife.

In the wake of these inconsistencies of judgment, necromancers, sorcerers and witches were able to utilize spells with holy names with impunity, as biblical references in such rituals could be construed as prayers as opposed to spells. As a result, the necromancy discussed in the Munich Manual is an evolution of these understandings. It has even been suggested that the authors of the Munich Manual knowingly designed this book to be in discord with understood ecclesiastical law.

It is possible to trace Christian ritual and prayer and its subsequent mutant forms of utility and healing prayer/spells to full-blown necromancy. The main recipe employed throughout the manual in the necromancy sorcery uses the same vocabulary and structure utilizing the same languages, sections, names of power alongside demonic names. The understanding of the names of God from apocryphal texts and the Hebrew torah demand that the author of such rites have at least a casual familiarity of these texts. The structure of the spells themselves also requires that the author have experience with Christian rites that are not pedestrian, again suggesting either the Nobility or Christian scholars as possible suspects.

As we have suggested that alleged Christians might have been the authors of the sundry necromancy manuals, the question of their inspirations must arise. One of the first clues could be the Gods and demons references in the illusions, conjurations and spells. The Hebrew Tetragrammaton and various Hebrew derivatives are found, as well as Hebrew and Greek liturgical formulas (Kieckhefer, 139). Within the tales related in these Manuals, we also find connections with other stories in similar cultural literature (Kieckhefer, 43). The ceremony for conjuring a horse closely relates to the Arabic The Thousand and One Nights, and the French romances. Chaucer’s The Squire's Tale also has marked similarities. This becomes a parallel evolution of spells to foreign Gods or demons that were once acceptable, and framing them into a new Christian context, albeit demonic and forbidden. Most forms of Satanic Necromancy today include prayers to such Demons, namely Nebiros, Azrael, and Beelzebub.

As the source material for these manuals is apparently derived from scholarly magical and religious texts from a variety of sources in many languages, it is easy to conclude that the scholars that studied these texts manufactured their own aggregate sourcebook and manual with which to work spells or magic.

Although it may be said that necromancy is the divination of the future, that may have been the view of only a handful of people. A necromancer could also use his powers to trap the spirits of the dead on the earth, thereby increasing his own powers over the craft. Also, based on how much of knowledge the necromancer had, he could accordingly summon or reanimate dead creatures and control them to do his bidding.

In Bygone Beliefs, Herbert Stanley Redgrove regards necromancy as being one of three chief branches of mediaeval Ceremonial magic, the others being Black magic and White magic. (taken from chapter 7: Ceremonial magic in theory and practice)

Eliphas Levi, in his book Dogma et Ritual, states that necromancy is the evoking of aerial bodies. (page 64)

In an article by Leilah Wendell, called Necromancy 101, she states a newer interpretation of necromancy:

True necromancy, or what I prefer to call Necromantic Practice can only be achieved when all elements of fear are eradicated. Necromantic Practice does not involve dominance and servitude. In other words, the spirits of the dead, or of Death Itself, are not at the magician's beck and call, nor will they, nor "He" do your "bidding". It is only the arrogant soul that believes this. One cannot "conjure" nor "command" spirits.

In the The Notebooks of Leonardo Da Vinci, it is stated that:

Of all human opinions that is to be reputed the most foolish which deals with the belief in Necromancy, the sister of Alchemy, which gives birth to simple and natural things. (taken from 12:13)

The Internet Book of Shadows

The Internet Book of Shadows reprints a passage form An Encyclopedia of Occultism that states:

The art is of almost universal usage. Considerable difference of opinion exists among modern adepts as to the exact methods to be properly pursued in the necromantic art, and it must be borne in mind the necromancy, which in the Middle Ages was called sorcery, shades into modern spiritualistic practice. There is no doubt, however, that necromancy is the touchstone of occultism, for if, after careful preparation the adept can carry through to a successful issue, the raising of the soul from the other world, he has proved the value of his art. It would be fruitless in this place to enter into a psychological discussion as to whether the feat is possible of accomplishment or not, and we will confine ourselves to the material which has been placed at our disposal by the sages of the past, who have left full details as to how the process should be approached.