In Greek mythology, the Nereids (NEER-ee-eds) are blue-haired sea nymphs, daughters of Nereus and Doris. They often accompany Poseidon and are always friendly and helpful towards sailors fighting perilous storms. They are associated with the Mediterranean Sea. 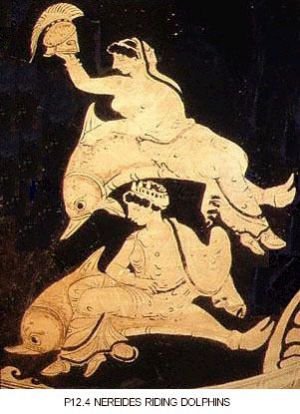 NEREIS (Nêreïs), or Nerine (Virg. Eclog. vii. 37), is a patronymic from Nereus, and applied to his daughters (Nereides, Nêreïdes, and in Homer Nêrêïdes) by Doris

Nereids were depicted as youthful, beautiful maidens, sometimes clothed, sometimes naked. They were often shown holding fish in their hands. They appeared in the retinue of Poseidon accompanied by Tritones and other sea monsters, and riding dolphins, hippokampoi, and other sea animals. Thetis was often portrayed as their unofficial leader.

They were frequently represented in antiquity, in paintings, on gems, in reliefs and statues, and commonly as youthful, beautiful, and naked maidens, and often grouped together with Tritons and other marine monsters, in which they resemble the Bacchic routs.

Sometimes, also, they appear on gems as half maidens and half fish, like mermaids, the belief in whom is quite analogous to the belief of the ancients in the existence of the Nereides.

Sometimes seen frolicking on the surface of the water, the nereids (whose name means 'wet ones') lived in the underwater palace of their father. These virgins had golden hair and each had a golden throne in their father's palace. They wove and spun and often rode on dolphins.

As daughters of Nereus, they have the same power to assume any shape they chose. The Nereids rendered assistance to sailors and fishermen and were worshipped especially in sea-port towns.

The Nereids are the daughters of the nymph Doris and of Nereus. They number in fifty (although it is sometimes said that they number in 100). The most notable of them is Thetis, wife of Peleus and mother of Achilles; and Amphitrite, wife of Poseidon.

Source: Dictionary of Greek and Roman Biography and Mythology. C19th Classics Encyclopedia. NAMES OF THE NEREIDES

The names underlined are those Nereides which are common to most of the lists of these goddesses given by ancient authors (and which named in common by both Homer and Hesiod).

(This list does not include the last 17 names from the list of Hyginus - a typically inaccurate writer, who obtained these names from Virgil's list of unrelated Okeanides).