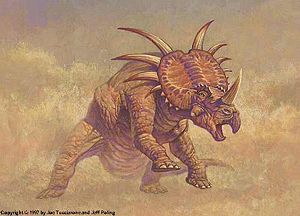 The Ngoubou is a purportedly surviving ceratopsian-like cryptid in the savanna region of Cameroon.

The Ngoubou is said to the size of an ox, bearing six horns, and fights elephants for land, despite its smaller size.

Bernard Heuvelmans included a sighting of an animal resembling the Ngoubou in his book "On the Track of Unknown Animals". The sighting, apparently from the London Times, was taken on the 17th of November 1919. The sighting was made by a man named Lepage who was in charge of a railway construction in the Belgian Congo. He states that while hunting in the Congo rainforest "he came across an extraordinary monster, which charged at him. Lepage fired but was forced to flee, with the monster in chase. The animal before long gave up the chase and Lepage was able to examine it through his binoculars. The animal, he says, was about 24 feet in length with a long pointed snout adorned with tusks like horns and a short horn above the nostrils. The front feet were like those of a horse and the hind hoofs were cloven. There was a scaly hump on the monsters shoulder."

In November 2000, William Gibbons did some preliminary research in Cameroon for a future Mokele-mbembe expedition. He was accompanied by David Wetzel. While visiting with a group of pygmies they were informed about an animal called Ngoubou. Although ngoubou is also the local word for rhinoceros, the pygmies asserted this was not a regular rhinoceros, as it had more than one horn (six horns on the frill in one account), and further stated that the father of one of the senior members of the community had killed one with a spear a number of years ago. The locals had noted a firm decline in the population of these animals lately, making them harder to find.

Gibbons identified the animal with a Styracosaurus, but these are currently only known to have inhabited North America. It might be related to the Emela-ntouka, but this animal is single-horned. Moreover ceratopsian fossils are not found in Africa. Most have been found in Eastern Asia and North America, with one find in Australia.

Part of this article consists of modified text from Wikipedia, and the article is therefore licensed under GFDL.
Retrieved from "https://www.monstropedia.org/index.php?title=Ngoubou&oldid=11618"
Categories: