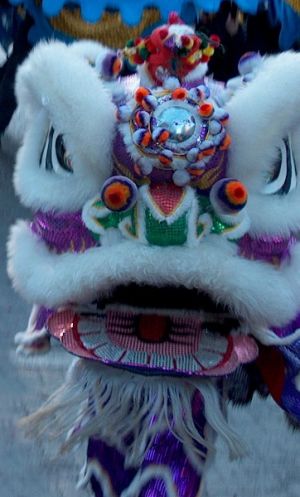 In Chinese mythology, a Nian (simplified Chinese: 年兽; traditional Chinese: 年獸; pinyin: nián shòu) is a beast that lives under the sea or in the mountains.

The Chinese word for 'year' is the same as the name of this beast. A phrase for celebrating Chinese New Year, guo nian (simplified Chinese: 过年; traditional Chinese: 過年; pinyin: guò nián) means 'the passing of the beast'.

The story is said to have originated in a small province of Shanghai. The legend of the Nian occupies a fundamental role in traditional Chinese, having given birth to a tradition that survives very much unchanged among the Chinese of the modern era. Very few of the other great monstrous beasts and behemoths of mythology can lay claim to a legacy as enduring as that of the Nian.

In the ancient primoridal past when the race of man had yet to attain the position of ascendent power that it currently enjoys, the unfortunate ancestors of the Chinese race were subject to the ravenous predations of the terrifying wild beasts that dwelled in the bleak and unruly vicinity of the lofty mountains. Whenever hunger brought on by the onset of a harsh winter would prompt these grim monsters to temporrarily abandon their bleak home in search of raw flesh for their ravenous bellies, they would inevitably descend on the human farming settlements in the fertile valleys below, to raid the wretched inhabitants and carry off some pitiful soul doomed to become their meal for the night. Naturally, the miseries of the early humans were great, and not a single night would pass without a luckless family mourning for the loved one snatched away by some horror that had descended from the mountains.

But these dreadful brutes themselves lived in terror of a creature infinitely more awful and maloveant than all the rest of them combined. An immensely large beast reputedly endowed with a maw vast enough to seize and devour a multitude of people in a single swallow, the Nian was a terror to behold indeed, with its massive horns, enormous tail, and an unnatural appearance that combined the powerful frame of a bull with the snarling head of a lion.

The potential of this abombination to devastate humanity was not lost on the luminaries of Heaven, and so the Jade Emperor in his great wisdom, compelled the Nian to confine itself to its dreary mountain home most of the time. But a loophole did exist in this otherwise inspired decree, one that the Nian exploited with terrible consequences for mortal kind. On the first and fifteenth day of every year, as winter begun to recede to make way for the first signs of the new spring, the Nian was pwrmitted to roam as it pleased, blighting every living thing that had the misfortune to stray into its destructive path.

Falling with great gusto upon the wretched vilages, he would depopulate them in their entirety, leaving behind terrible lessons for other villages foolish enough to doubt the sagacity of fleeing before the Nian's onset the moment its movements were known.

But the gods were not unkind and it so happened that one of them felt motivated to check the menace of the Nian for once and all..

One day, as the inhabitants of a village were in the midst of an upheavel caused by reports that they lay smack in the middle of the Nian's war-path, an old mendicant wandered into their presence. Much pertubed by the evident chaos, he questioned them as to the nature of the commotion that was assailing them. Far too preoccupied in their eagerness to flee before the jaws of the Nian could close over them, the populace simply ignored him, not wishing to sacrfice precious moments in conversation with a lunatic so painfully oblivious to the mortal peril posed by the creature's incoming arrival. But one elderly woman, moved by concern for the stranger's safety, paused long enough to warn him to desert the place immediately. When querried about the threat hanging over the village, she described the existence of the Nian briefly, before joining the general flight.

But the old man did not flee with them. Instead, chuckling to himself, he walked all the way into heart of the desolate mountains and surprised the Nian in its own home. Swiftly opening a conversation with the astonished beast before the thought of eating him could cross its head, he gently reproached it for picking on the helpless people of the villages to appease its apetite. A creature so prodigiously mighty as itself he reminded, should refrain from unequal contests with the weak humans and should instead seek conflict with the other formidable beasts of prey, a practice that would befit a creature of its fearsome reputation. Its ego stirred by his fawning testaments to its strength, the Nian readily agreed. Soon it was scouring the mountains in search of every worthy quarry it could rend with its jaws.

As fearsome as they may have been in human eyes, the other beasts of prey were unable to stand up to the Nian's unrelenting assault, and so succumbing to panic, they fled into the thick, impenetrable jungle to escape it.

But give the voracious apetite of the Nian, it wasn't long before the mountains soon became devoid of all animal life, and the beast soon found itself denied prey within the boundaries of its home. But its hunger did not vanish with the wild-beasts and continued to trouble it. Eager to whet its lingering hunger, it begun to make its way to the village that it had orginally intended to plunder, confident it could eat well there.

It was greatly dissapointed to find the village completely deserted with nary a living soul in sight. But just when it was about to turn back and travel elsewhere to seek its meal, it detected sign of life coming from within a single hut. Its curiosity aroused, it approached the hut, hopeful that at least a single human had foolishly remained behind to feed it. Awful loud sounds of thunder suddenly boomed into existence out of seemingly nowhere, sending jolts of terror running through its trembling spine. The horrendously loud clashes of clanging cymbals rapidly followed on the heels of the thunder, further heightening the confusion and distress of the unsettled beast.

Just when the situation had become as sinister and menacing as it concievabally could to the by-now thoroughly afraid Nian, the door of the hut was rudely flung back to reveal the same smiling old man that had first approached it. Except now that he was dressed in robes of red, the color that the Nian feared above all else in creation. Uttering a single howl of anguished terror, it fled, never to be seen in those parts again.

A period of time passed, and the villagers returned to their village, hoping to settle there once again. And who should meet their eyes, but the same old fool that had certainly forfieted his life by choosing to stay and welcome the terrible coming of the Nian? But in defiance of all reason, here he was, still as alive and genial as ever. Amused by their well warranted amazement, the old man related the story of his victory over the Nian. It only then that the villagers realized that the old man was no less than an immortal that had come to earth to spare mankind further ravages from the Nian, by arming them with the secret of defeating the terrible scourge.

A very similiar but somewhat different version of the legend of Nian, has it that the elderly saviour of the people did not choose to passively await the arrival of the monster, choosing instead to sojourn to its lair a second time and once having reached there, proceed to subjugate it with the aid of his fire-crackers, cymbals and red under-garments, all of for which the Nian possessed a consuming phobia that completely robbed it of its aggression. Flush with his victory over the erstwhile terror of the land, the old man subsequently appeared before the fleeing refugees of the village and astonished them by forcing the Nain to demonstrate its obediance. Then both the beast and its tamer ascend to Heaven, awing their mortal audience.

To this day, the Chinese celebrate every coming spring by setting off fire-crackers, playing loud instruments and adorning the laterns outside their homes with strips of red, confident that the Nian will be cowed by their show of force and so leave them untroubled. Once the night is over, people will then congregate together with their relations to congratulate one another on surviving the Nian. So closely intwined with the arrival of every new year is the Nian legend, that the Chinese word for year is also known as Nian.

The Chinese New Year traditions of decorating in red, exploding firecrackers, and performing a lion dance were originally used to scare the beast away. The tradition began when a Nian attacked a village. After the attack, the villagers discussed how to make the Nian leave them alone. Eventually they came up with a plan where drums, plates and empty bowls were hit and firecrackers were thrown, causing loud banging sounds that would scare off the Nian. This scared the Nian, and since that time, the Nian has not appeared in the village again. Some people display Chinese couplets on red banners to prevent the Nian from returning. Numerous other traditions such as wearing red clothing or handing out red envelopes are also designed to protect against the Nian.

A lion dance is a traditional dance usually performed by martial artists or acrobats. One or more performers hold up a large costume beast with a distinctive head, and one or more human characters will dance around the beast. Although these dances are commonly called lion dances, the beast portrayed is often not a lion. In northern China, it may be a Rui Shi or Fu Dog. In the south of China, it may be a nian. The Cantonese lion dance is sometimes a reenactment of the legend of Bu Dai taming the Nian.