According to the Bible, Nisroch is the Assyrian god of agriculture but was later identified as a demon. 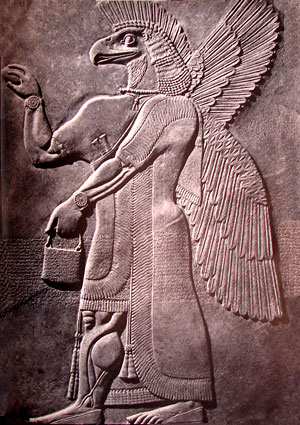 The Assyrian god Nisroch was depicted as an eagle-headed diety with wings and exaggerated muscles. In this sculptured relief from Nineveh he is sprinkling the sacred tree with water. He is holding a water vessel in his left hand and a fir cone (sponge) in his right.

Nisroch is connected with the Hebrew word Nesher and means "the great eagle" .

The eagle-headed hybrid prominent on the earliest Assyrian monuments, and is always represented as contending with and conquering the lion or the bull. However, there is no text that relates with this god which has also been associated with the Assyrian gods Enlil and Ninurta.

It was to this god that Sennacherib, king of Assyria was praying when he returned from his campaigns in Israel. The previous verse reveals that the Angel of the Lord routed the Assyrian army.

"So Sennacherib king of Assyria departed, and went and returned, and dwelt at Nineveh. And it came to pass, as he was worshipping in the house of Nisroch his god, that Adrammelech and Sharezer his :sons smote him with the sword: and they escaped into the land of Armenia. And Esarhaddon his son reigned in his stead."

Some religious authors consider Nisroch to be a fallen angel, once of the order of Principalities and an associate to Belphegor. Johann Weyer and Collin de Plancy wrote that Nisroch is chief of cuisine to the princes in Hell.