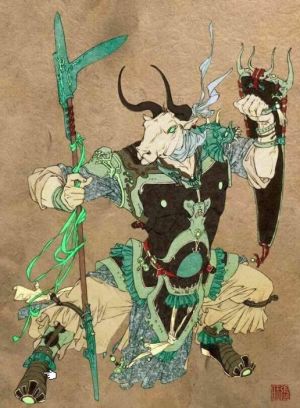 Once led a Fahua army, now cut the tail and the hooves to adhere to my Buddha: Salutes the Arab League amida.

His shape was an ox head with a human body, grasping a massive steel fork in his hands. His strength was immense enough to be able to move mountains.

Usually, the two are mentioned together. They are the first people a dead soul meets upon arriving in the Underworld; in many stories they directly escort the newly dead to the Underworld. In Hades, Niu-Tou held the post of a patrolman, hunting down and arresting the escaping criminals

In the Chinese classic novel Journey to the West, at one point Horse-Face and Ox-Head are sent to capture Sun Wukong, the Monkey King. Sun Wukong overpowers both of them and scares them away. He then breaks into the Underworld and crosses out the names of himself and his people from the record of living souls, hence granting immortality to himself and his monkey followers.

These two Hellish gods’ images were normally displayed in the ghost town, Fengtu or in the regional town temples.