Nosferatu is another name for the fictional character of Bram Stocker's Dracula.

Nosferatu comes from the Greek word nosophoros (which means "plague-carrier") that evolved into the Old Slavonic word "nosufur-atu".

The name was associated for the first time to vampirism in an article written by Emily Gerard titled "Transylvanian Superstitions" which was published in the the July, 1885 issue of the magazine XIX Century.

The article was read by Bram Stoker, and the name became popular in fictional literature as the result of Stoker using the name in his novel Dracula.

Ironically, there are no other credible accounts of the name nosferatu being used in Romanian or Slavic folklore .

Nosferatu, eine Symphonie des Grauens ("Nosferatu, a Symphony of Horror" in German) is a German Expressionist film shot in 1921 by Friedrich Wilhelm Murnau, and released in 1922. Unable to obtain the rights to film a version of Bram Stoker's Dracula, Murnau decided instead to film his own version with only slight changes to the story. For instance, "Dracula" became "Nosferatu" and the names of the characters changed, with Count Dracula changed to Count Orlok. The role of the vampire was played by Max Schreck. Other major actors in the film were Gustav von Wangenheim (as Thomas Hutter/Jonathan Harker), Greta Schröder (as Ellen Hutter/Mina M. Harker), and Alexander Granach (as Knock/R.M. Renfield). 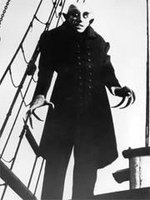 The ending is nevertheless substantially different from that of Dracula. Count Orlock (Dracula) is ultimately destroyed when the character "Mina" sacrifices herself to him. In the book (and many later versions of the story) Dracula is destroyed physically. The timeframe of the story is significantly earlier: according to the logbook of the ship captain, it takes place in 1838, while Dracula takes place in the 1890s. A preview for the film can also be found, in which the scene where Ellen sits up and the subtitles say "Hutter!," is changed to the subtitles saying "Jonathon, Jonathon, hear me!" It can be inferred that this scene was cut out after Mrs. Stoker filed a lawsuit against F.W. Murnau.

Film, television and the media

In addition to other works inspired by Nosferatu, the film the and its variant of the vampire legend has had a significant influence on Gothic rock and death metal music. The following list of references is by no means comprehensive.

Part of this article consists of modified text from Wikipedia, and the article is therefore licensed under GFDL.
Retrieved from "https://www.monstropedia.org/index.php?title=Nosferatu&oldid=8436"
Categories: