The Nuckelavee (or Nuckalavee) is an hybrid fairy creature from the Northern Scottish (Orkney) folklore from the Fuath family. 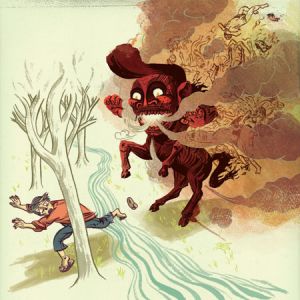 Nuckelavee was one of the most terrible and feared creatures of Scottish foklore. It is sometimes mentioned as an Unseelie, a malignant fairy, and, unlike many other members of that type, is completely evil and monstrous rather than simply mischevious. The creature's home was in the sea but it ventured on land often to feast upon humans or drag them into the water, or to poison crops and livestock with its diseased breath. The Nuckelavee rode a horse, as skinless as its rider, on land, and its horse was sometimes indistinguishable with its own body. Some storytellers merged the two monsters so that rider and horse become one - a vile hybrid of man and beast.

From the few recorded descriptions of the Nuckelavee, we learn that its head was "ten times larger" than a man's with an incredibly wide mouth that jutted out like a pig's snout and a single fiery eye that burned with a red flame. Its arms reached to the ground, its body was distorted and its huge head swayed on a small neck, as if it was to weak to hold the swollen head.

Hairless, its body was also skinless, its entire surface appearing like raw and living flesh. It was said that its thick, black blood could be seen coursing through its yellow veins, as its sinewy muscles writhed with every movement it made.

The creature was armed with venomous breath and great physical and magical strength. It was held responsible for all manner of disasters: ruined crops, epidemics in both humans and animals, and drought.

"If crops were blighted by sea-gust or mildew, if livestock fell over high rocks that skirt the shores, or if an epidemic raged among men, or among the lower animals, Nuckelavee was the cause of all. His breath was venom, falling like blight on vegetable, and with deadly disease on animal life."

It did, however, have one weakness, an aversion to fresh water, a trait shared by numerous malevolent fairies. In one tale a man called Tammy (or Thomas) escapes the beast by jumping over running water, leaving his bonnet in the monster's clutches. This theme of a narrow escape often crops up in Scottish folklore. It is also noted that many supernatural creatures cannot cross fresh running water.

The old practice of burning gathered seaweed to make kelp was said to cause terrible offense to Nuckelavee. The creature could not stand the smell of the pungent smoke and would run into an extreme and destructive rage. In this state it would vent its wrath by smiting all the horses on the island of Stronsay - the island where kelp was first burned in Orkney - with a deadly disease known as Mortasheen. At this time, the only entity capable of stopping it was the Mither O' The Sea, another ancient god-like being of Celtic and Orkney mythology. Her powers held Nuckelavee in the sea during summer, restricting the damage the monster could do. Its fear of water caused it to hide in the sea during the wet winter months.

Despite the fact that its home was considered to be the sea, the Nuckelavee was known to wander freely on land. It was during these landward excursions that it was most often encountered by mortals.

The Orkney folklorist Walter Traill Dennison, who lived in Sanday in the nineteenth century, claimed to know of a man who had actually encountered Nuckelavee and lived to tell the tale. According to Dennison, the man was very reticent to talk on the subject and only after much "higgling and persuasion" was a narrative forthcoming.

Tammas, like his namesake Tam o' Shanter, was out late one night. It was, though moonless, a fine starlit night. Tammas's road lay close by the seashore, and as he entered a part of the road that was hemmed in on one side by the sea, and on the other by a deep fresh-water loch, he saw some huge object in front of, and moving towards him. What was he to do? He was sure it was no earthly thing that was steadily coming towards him. He could not go to either side, and to turn his back to an evil thing he had heard was the most dangerous position of all; so Tammie said to himself, "The Lord be aboot me, any tak' care o' me, as I am oot on no evil intent this night!" Tammie was always regarded as rough and foolhardy. Anyway, he determined, as the best of two evils, to face the foe, and so walked resolutely yet slowly forward. He soon discovered to his horror that the gruesome creature approaching him was no other than the dreaded Nuckelavee.

The lower part of this terrible monster, as seen by Tammie, was like a great horse with flappers like fins about his legs, with a mouth as wide as a whale's, from whence came breath like steam from a brewing-kettle. He had but one eye, and that as red as fire. On him sat, or rather seemed to grow from his back, a huge man with no legs, and arms that reached nearly to the ground. His head was as big as a clue of simmons (a clue of straw ropes, generally about three feet in diameter), and this huge head kept rolling from one shoulder to the other as if it meant to tumble off. But what to Tammie appeared most horrible of all, was that the monster was skinless; this utter want of skin adding much to the terrific appearance of the creature's naked body,--the whole surface of it showing only red raw flesh, in which Tammie saw blood, black as tar, running through yellow veins, and great white sinews, thick as horse tethers, twisting, stretching, and contracting as the monster moved. Tammie went slowly on in mortal terror, his hair on end, a cold sensation like a film of ice between his scalp and his skull, and a cold sweat bursting from every pore. But he knew it was useless to flee, and he said, if he had to die, he would rather see who killed him than die with his back to the foe. In all his terror Tammie remembered what he had heard of Nuckelavee's dislike to fresh water, and, therefore, took that side of the road nearest to the loch. The awful moment came when the lower part of the head of the monster got abreast of Tammie. The mouth of the monster yawned like a bottomless pit.

Tammie found its hot breath like fire on his face: the long arms were stretched out to seize the unhappy man. To avoid, if possible, the monster's clutch, Tammie swerved as near as he could to the loch; in doing so one of his feet went into the loch, splashing up some water on the foreleg of the monster, whereat the horse gave a snort like thunder and shied over to the other side of the road, and Tammie felt the wind of Nuckelavee's clutches as he narrowly escaped the monster's grip. Tammie saw his opportunity, and ran with all his might; and sore need had he to run, for Nuckelavee had turned and was galloping after him, and bellowing with a sound like the roaring of the sea. In front of Tammie lay a rivulet, through which the surplus water of the loch found its way to the sea, and Tammie knew, if he could only cross the running water, he was safe; so he strained every nerve. As he reached the near bank another clutch was made at him by the long arms. Tammie made a desperate spring and reached the other side, leaving his bonnet in the monster's clutches. Nuckelavee gave a wild unearthly yell of disappointed rage as Tammie fell senseless on the safe side of the water.

While many of the supernatural beings were looked upon by the people with a kind of sympathetic regard, this being was looked upon with unutterable horror, was regarded with mortal terror, and spoken of with bated breath. He was a monster of unmixed malignity, never willingly resting from doing evil to mankind. He never played a trick for the mere love of fun. Indeed, if not restrained by the Mither of the Sea in summer, and in winter by his terror of fresh water, he would long ago have made Orkney a manless desert. Nuckelavee was a spirit in flesh. His home was the sea; and whatever his means of transit were in that element, when he moved on land he rode a horse as terrible in aspect as himself. Some thought that rider and horse were really one, and that this was the shape of the monster. Nuckelavee's head was like a man's, only ten times larger, and his mouth projected like that of a pig and was enormously wide. There was not a hair on the monster's body, for the very good reason that he had no skin. The whole surface of the monster appeared like raw and living flesh, from which the skin had been stripped. You could see the black blood flowing through his veins, and every movement of his muscles, when the horrid creature moved, showed white sinews in motion. What a study for an anatomist!

If crops were blighted by sea-gust or mildew, if live stock fell over high rocks that skirt the shores, or if an epidemic raged among men, or among the lower animals, Nuckelavee was the cause of all. His breath was venom, falling like blight on vegetable, and with deadly disease on animal life. He was also blamed for long-continued droughts; for some unknown reason he had serious objections to fresh water, and was never known to visit the land during rain.

The burning of sea-weed for kelp gave terrible offence to Nuckelavee, and filled him with diabolical rage. He vented his wrath by smiting with deadly disease horses in the island of Stronsay (for that was the island where kelp was first made in Orkney), and that disease spread over all the islands where kelp was made. That disease was called Mortasheen.

Part of this article consists of modified text from Wikipedia, and the article is therefore licensed under GFDL.
Retrieved from "https://www.monstropedia.org/index.php?title=Nuckelavee&oldid=16124"
Categories: