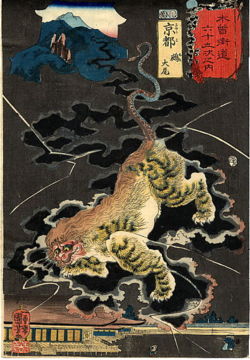 Kuniyoshi Utagawa, Taiba (The End), 1852. The print depicts a nue descending upon the Imperial palace in a black cloud

A nue (鵺) is a chimera-like creature found in Japanese folklore.

Nue as a word appears in the oldest of Japanese literature. Early quotes include Kojiki (712) and Wamyo Ruijusho (c. 934). Due to the usage of Man'yogana, the historical spelling is known to have been nuye. At this early time, though, it had a different semantic meaning. It referred to a bird known as White's Thrush.

Nue usually described as having the head of a monkey, the body of a racoon dog, the limbs of a tiger, and a snake tail. According to the legend, a nue can transform into a black cloud and fly.

According to The Tale of the Heike, Emperor Konoe, the Emperor of Japan, became sick after having terrible nightmares every night, and a dark cloud appeared at two o'clock in the morning on roof of the palace in Kyoto during the summer of 1153. The story says that the samurai Minamoto no Yorimasa staked-out the roof one night and fired an arrow into the cloud, out of which fell a dead nue. Yorimasu then supposedly sank the body in the Sea of Japan.

In a local expansion of the story, the nue's corpse floated into a certain bay, and the locals, fearing a curse, buried it. A mound which exists today is supposed to be this grave.

In the 13th century, Heike Monogatari makes reference to a creature called a nue. In addition to having the head of a monkey, the body of a tanuki, the paws of a tiger, and the tail of a snake, it has the voice of a White's Thrush. 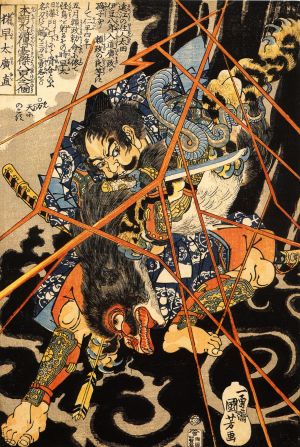 Around 1435, Zeami wrote a Noh song titled Nue dealing with the events described in Heike.

Part of this article consists of modified text from Wikipedia, and the article is therefore licensed under GFDL.
Retrieved from "https://www.monstropedia.org/index.php?title=Nue&oldid=14776"
Categories: