In Philippine mythology, a Nuno or Nuno sa Punso is described as a dwarf-like creature that lives in an anthill or termite mound. 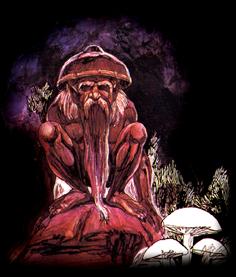 The Nuno is different from the duwende or dwarf in Philippine folklore. It is characterized as a small old man the size of a toddler with a long beard.

The duwende is usually a playful and reveals himself to children while the Nuno gets angry easily and will hurt those who disturb his mound.

The Nuno’s home are usually located under the big rocks, trees, riverbanks, caves and backyard.

The Nunos' special curses include the following:

The Nuno will curse a person if he or she goes near to the Nuno’s proximity. If the offender is inside the range, the Nuno can spit on any part of his or her body. The offender will then suffer aches and soreness on the affected part like stomach ache, swollen genitals or swollen feet. For instance, when an intruder damages the home of the Nuno by kicking it, the foot of the offender will swell.

How to fight Nuno’s curses

Other people believe that if modern medicine can’t cure a certain disease then the illness may be caused by a Nuno’s curse. In this case, the victim should seek the help of an albularyo, a traditional medicine practitioner in the Philippines. A ceremony called tawas will be performed where a candle is melted and the molten wax will be dispensed in to a spoon or disc. Then, the molten wax will be poured into water. Based from the image formed on the water, the albularyo will give his interpretations on the cause of the illness as well as the place where the curse happened.

The family of the victim should give an offering like food, fruits and others to the Nuno so that the curse will be lifted. If the victim is still not cured after the offering, the victim must personally asked forgiveness from the Nuno.

The spell casted by the Nuno can be also be removed by catching the Nuno and crushing its head between a person’s fingers. However, this method could provoke anger to the Nuno’s friends and relatives.

According to the legends, victims can also seek revenge to the Nuno by placing an obese woman on the side of road after midnight. The Nuno is attracted with large bodied mammals of the opposite sex.

Children are advised to not play outside between 12 noon and 3pm to stay away from the wrath of the Nuno. Parents also asked their children to go home before 6pm. Meanwhile, children should keep quite on places where Nuno sa Punso dwells and they should ask permission before passing these places. They can speak tabi tabi po (please be on the side or please move aside) or please let me pass by or I mean no harm as I pass through your territory, Old Man of the Mound.

Since the 2005 introduction of the red fire ant in the Philippines, the legendary folk tale of the Nuno has gained new traction.