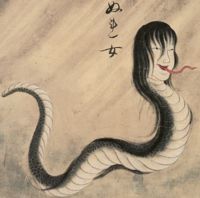 A nure-onna (濡女 lit. "wet woman") is an amphibious creature with the head of a woman and the body of a snake.

While the description of her appearance varies slightly from story to story, nure-onna has been described as having a serpentine body as long as 300 m in length and a human head with snake-like eyes, fangs and long, beautiful hair. She is often depicted as having long fingernails like claws on both hands.

Typically a Nure-onna is seen by the shore, washing her hair. She often attracts males rather than females by her nature, and she will assume her monstrous form if they come close enough, to investigate. A nure-onna's intention are unknown. In some stories, she is a monstrous being who is powerful enough to crush trees with her tail and feeds on humans. She carries with her a small, child-like bundle, which she uses to attract potential victims. If a well-intentioned person offers to hold the baby for her, he must hold the child carefully and lovingly, or else Nure-onna will become angry. In the meantime, the bundle will become more and more heavy, preventing the victim from escaping while she uses her long, snake-like tongue to suck all his blood.

Other stories give her abilities such as being able to suck the blood from someone at a distance. She can also crush even the trunk of a mighty tree with her massive snakelike tail.