nurikabe as illustrated by Mizuki Shigeru.

The nurikabe (ぬりかべ) is a yokai, or spirit, from Japanese folklore.

The nurikabe manifests as an invisible wall that impedes or misdirects walking travelers at night. Trying to go around is futile as it extends itself forever. Knocking on the lower part of the wall makes it disappear. 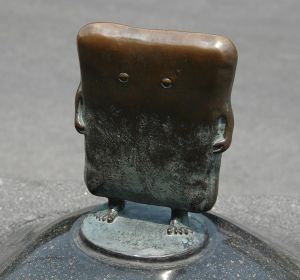 A statue depicting the nurikabe from GeGeGe no Kitaro by Shigeru Mizuki on the road bearing his name.

Nurikabe, like other yokai, often appear in manga and anime. For example, the anime and manga GeGeGe no Kitaro features a nurikabe as the hero's ally, as does the more recent Petopeto-san. the manga-ka kojima akira draws a nurikabe as his self-portrait. Nurikabe, or characters based on it, have appeared in the video games Okami (as "Blockhead") and Super Mario 64 (as Whomp). It was also referenced in episode 16 of Azumanga Daioh.

Part of this article consists of modified text from Wikipedia, and the article is therefore licensed under GFDL.
Retrieved from "https://www.monstropedia.org/index.php?title=Nurikabe&oldid=11074"
Categories: