Oberon, also Auberon, King of the fairy, is most famous as a character in William Shakespeare's play, A Midsummer Night's Dream, written in the mid-1590s. Oberon gives his wife, Titania, a potion that causes her to fall in love with Bottom in order to get the changeling. 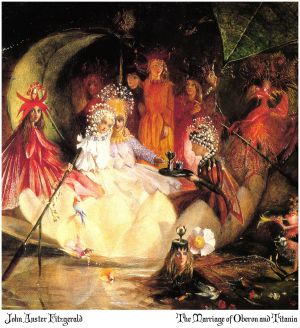 The marriage of Titania and Oberon from John Anster Fitzgerald

The medieval concept of the character Oberon arose from a multitude of earlier sources.

Oberon's status as king of elves comes from the character of Alberich (elbe "elves" reix, rex "king"), a sorcerer in the legendary history of the Merovingian dynasty. In the legend, he is the otherworldly "brother" of Merowig, whose name is the eponym of the Merovingians. Alberich wins for his eldest son Walbert the hand of a princess of Constantinople. In the Nibelungenlied, a burgundian poem written around the turn of the 13th century, Alberich guards the treasure of the Nibelungen, but is overcome by Sigfrid.

The name Oberon got its literary start in the first half of the 13th century from the fairy dwarf Oberon that helps the hero in the chanson de geste, titled Les Prouesses et faitz du noble Huon de Bordeaux. In the song, the noble Huon, son of Seguin count of Bordeaux, kills a man who lay in ambush for him, who turns out to be Charlot, the Holy Roman Emperor. Huon is condemned but wins a reprieve on the condition that he visits the court of the amir of Babylon, kisses the amir's daughter Esclarmonde three times, slays the greatest of the amir's knights, and brings back a hank of the amir's hair and four of his back teeth. By the help of Auberon, Huon succeeds, though he meets with many adventurous episodes along the way.

The real Seguin was count of Bordeaux under Louis the Pious in 839, and died fighting against the Normans in 845. Charles l'Enfant, a son of Charles the Bald, died in 866 of wounds inflicted by a certain Aubouin in the circumstances of an ambush similar to the Charlot of the story.

Thus Oberon appears in a 13th century French courtly fantasy that is based on a shred of 9th century fact. He is given some Celtic trappings, such as a magical cup (similar to the Holy Grail) that is ever-full for the virtuous: "The magic cup supplied their evening meal; for such was its virtue that it afforded not only wine, but more solid fare when desired" according to Thomas Bulfinch. In this story he is said to be the child of Morgan le Fay and Julius Caesar.

A manuscript of the romance in the city of Turin contains a prologue to the story of Huon de Bordeaux in the shape of a separate romance of Auberon, and four sequels, and there are later French versions as well.

Shakespeare saw or heard of the French heroic song, through the ca 1540 translation of John Bourchier, Lord Berners, called Huon of Burdeuxe. In Philip Henslowe's diary there is a note of a performance of a play, Hewen of Burdocize, on December 28, 1593.

In 1610, Ben Jonson wrote a masque of Oberon, the Fairy Prince. It was performed by Henry Frederick Stuart, the Prince of Wales, at the English court on New Year's Day, 1611.

In the four operas of 1854 to 1874 by Richard Wagner, Der Ring des Nibelungen|The Ring of the Nibelung, his role evolves in the opposite direction and he winds up stealing the Das Rheingold|Rhinemaidens' gold.