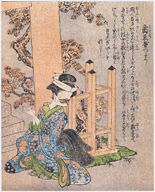 Ohaguro-bettari is a female yokai in Japanese mythology.

Long ago, when a Japanese woman got married she blackened her teeth as a sign of her married status. This was called ohaguro (“black teeth”).

In the Ehon hyaku monogatari Ohaguro-bettari is pictured as a woman in a bridal kimono with a mouth of blackened teeth and no other facial features, the image evoking a feeling of deep eeriness.

Some accounts suggest that she was formerly a woman who sold the teeth blackener, or an unattractive woman who was unable to get married and committed suicide, her ghost becoming the ohaguro bettari. Some also say that she could be a tanuki or mujina in disguise while others disagree and it is unclear what her true form really is.

Ohaguro-bettari usually appears at twilight usually in a shrine or temple outside of a town. There are also stories of one appearing in one's own house, though this is rare. She wears a beautiful kimono, and some say she wears a wedding outfit, but in either case she is turned away or concealing her face in her robe. However, from behind she appears to be a beautiful woman, and some men can't resist approaching to see her face. Exclaiming "Gya!" she reveals a white and ugly face, the bottom half splitting open to reveal a long range of teeth stained pitch black. The appearance of the face and her method of frightening people is very similar to the nopperabo.

Part of this article consists of modified text from Wikipedia, and the article is therefore licensed under GFDL.
Retrieved from "https://www.monstropedia.org/index.php?title=Ohaguro-bettari&oldid=11080"
Categories: