The olitiau is a cryptid giant bat reported from the Assumbo Mountains of Cameroon, best known from a sighting made by Ivan T. Sanderson and Gerald Russell in 1932. It is sometimes confused with the kongamato. 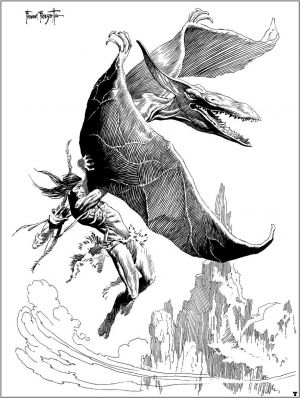 Olitiau is an Ipulo word, and is possibly a transcription of Ole Ntya ("cloven" or "forked"), which is the name of a dance mask with horns that is used to represent a demon. Bernard Heuvelmans argues that the name olitiau may not be the native term for the bat itself, as the locals could have misinterpreted Sanderson's description as that of a devil.

Sanderson described the olitiau, which he only saw briefly, as entirely black and about the size of an eagle, with a semicircle of pointed white teeth, set "about their own width apart from each other." These teeth were described as chattering. After the sighting, both Sanderson and Gerald Russell agreed that the animal had a wingspan of at least 12'. Sanderson later added that the bat's head was monkey-like rather than dog-like, and was not pointed.

Ivan T. Sanderson and Gerald Russell claimed to have seen an olitiau in 1932, when they were leading the Percy Sladen Expedition to West Africa. Their sighting was first published in Sanderson's book Animal Treasure (1937). Jørgen Birket-Smith, a comparative anatomist at the University of Copenhagen who had traveled in Cameroon and the Republic of the Congo, told Roy P. Mackal that he had met others in Cameroon who believed in the giant bat, including a schoolteacher who claimed to have seen it.

Sanderson allegedly saw an olitiau in 1932. It appeared to him and Gerald Russell, who were wading through a shallow river in the Assumbo Mountains, in the north of Mamfé, after they stopped to retrieve a hammer-headed bat they had shot.

When they returned to their camp, they encountered several local hunters who had come to sell them animals. Sanderson told these people about his encounter, and they told him he had seen an olitiau, a very feared animal. The hunters then fled from the camp; when they returned the following day, and Sanderson and Russell refused to move on, they became sullen. Both men kept detailed diaries while in Africa, and, when Sanderson consulted Russell on the sighting in 1970, he found that both their accounts matched, in memory and in writing.

Sanderson subsequently included another account of the sighting in Investigating the Unexplained (1972):

Whipping around toward [Russell], I was confronted by an apparition, such as I had never imagined existed, about fifteen feet away and just above the level of my eyes. It was coming straight at me awfully fast, so I ducked down into the water.

I got a very good and close look at its face and, to put it facetiously, "That weren't no boid." Its lower jaw hung down and, as the light of the sun was directly shining onto its face, I could have counted the huge white teeth if I had had the time. They were a good two inches long, all about the same length, and all equally separated by spaces of the same width. This animal that flew at me had a muzzle more like that of a monkey than of a dog or of any kind of reptile, in that it was not drawn out to a point. The whole animal was coal black in color, including the wings, which were quite opaque. It did not appear to be hairy, but then neither do most bats until you examine them in your hand.

Recovering my gun, I swung around and called to Gerald to watch out for it to come back, and a short time later it did so; but in those few minutes the last rays of the sun had moved up, and there was deep shadow over the river. We both blazed away with both barrels, but the great creature just sailed right over us, uninterrupted and making a "ssssh-sssshing" sound, so fast was it going. In fact, its speed of flight was much greater than we had estimated, and this speed may have been the reason we missed it, though Gerald is deadly at snap shots, and it was almost on top of us. I have often wondered if we did hit it, but that our shot, which was for collecting small animals, just failed to penetrate its hide. Alternatively, we may simply have blasted holes through its vast wing-membranes. We made haste back to our camp about a mile upstream.

The largest African bat is the hammer-headed bat (Hypsignathus monstrosus), which inhabited the area the olitiau was seen, but this bat has a distinctive head shape and is not aggressive.

Microbats such as the yellow-winged bat (Lavia frons) conform to the olitiau's morphology, but not its size.

Sanderson believed the animal he saw was a bat, and the most immediately obvious identity would be a bat of the order Megachiroptera, which are the largest bats. They possess the very widely-spaced teeth noted by Sanderson, and do have a habit of dipping into the water for unknown reasons. As described by Sanderson, the olitiau was far larger than any known African bat of either order, but Bernard Heuvelmans strongly questions Sanderson's estimate of its size.

Although Sanderson insisted the animal was a bat, Frank Lane described it as a pterosaur in print, a move resented by Sanderson. Although initially critical, Sanderson eventually became more sympathetic to the idea that the olitiau may have been a pterosaur, writing to Bernard Heuvelmans in 1959 to remark that he "didn't see anything unreasonable in it". Sanderson believed that pterosaurs were cliff and cave dwellers—and there were plenty of cliffs in the area—which "aeroplaned over water to dip for fish". However, Sanderson's final word on the subject was that the animal had definitely been a giant bat, which was also Russell's opinion.

The olitiau has been equated with the kongamato by several authors. Heuvelmans writes that "the general appearance, the size, the long jaws bristling with teeth, the habitat by the water's edge, and the panic it causes among the natives all agree". Additionally, the olitiau's habit of diving at people intruding on its territory could explain the kongamato's reputation for capsizing canoes. Karl Shuker also notes that one rarely-reported bat-like version of the kongamato is reminiscent of the olitiau.

In popular culture, the Olitiau was the subject of Lost Tapes, described as "Cave Demons". It was shown as a giant bat. Curiously, it is described as coming from the Tora Bora caves in Afghanistan, rather than Cameroon. It also appeared in the video game The Secret Saturdays: Beasts of the 5th Sun as a humanoid ally. The character Chico in Metal Gear Solid: Peace Walker suggests that Olitiau is evidence Pterosaurs exist to this day.