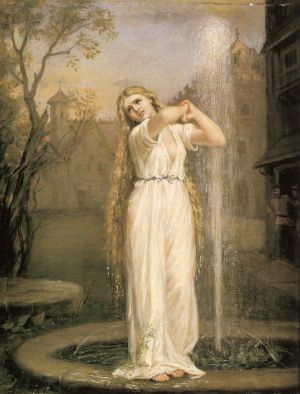 Ondines or undines are elemental spirits, categorized as the water elementals in works of alchemy by medieval scholar Paracelsus. In Germanic folklore, they also appear as fairy-like creatures; the name being interchangeable with those of other water spirits.

The word was invented by the Paracelsus.

According to Paracelsus, an Undine is a water nymph or water spirit, the elemental of water. They are usually found in forest pools and waterfalls. They have beautiful voices, which are sometimes heard over the sound of water.

Ondines are female water-spirits who like to associate with humans. They often join villagers in their dances and merry-making. An undine was created without a soul, but by marrying a mortal and bearing him a child she obtained a soul and with it all the pains and penalties of the human race. 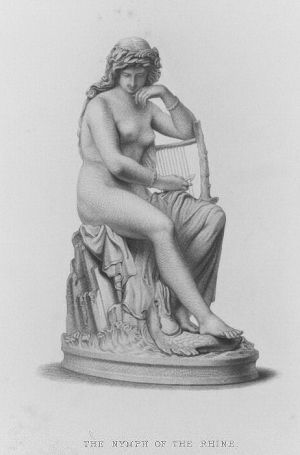 Ondine was a water nymph in German mythology. She was very beautiful and (like all nymphs) immortal. One of the "only threats" to a nymph's eternal happiness is if she falls in love with a mortal and bears his child - she will lose her "gift" of everlasting life.

Ondine fell in love with a dashing knight - Sir Lawrence - and they were married. When they exchanged vows, Lawrence said, "My every waking breath shall be my pledge of love and faithfulness to you." A year after their marriage Ondine gave birth to Lawrence’s child. From that moment on she began to age. As Ondine’s physical attractiveness diminished, Lawrence lost interest in his wife.

One afternoon Ondine was walking near the stables when she heard the familiar snoring of her husband. When she entered the stable, however, she saw Lawrence lying in the arms of another woman. Ondine pointed her finger at him, which he felt as a kick, waking up with a start. Ondine uttered a curse: "You swore faithfulness to me with every waking breath, and I accepted your oath. So be it. As long as you are awake, you shall have your breath, but should you ever fall asleep, then that breath will be taken from you and you will die!"

Ondine's curse is now a medical term applied to a rare syndrome where the autonomic (involuntary) control of breathing is lost, resulting in the need to initiate every breath consciously. Quality, price and users testimonials are those 3 factors that I took into consideration while choosing appropriate writing service to write my essay. I hold my eye on supremeessays.com and have never regretted my choice. They provided me with custom papers of the highest quality. Untreated, patients with Ondine's curse supposedly will - like Ondine's unfaithful spouse - die if they fall asleep.

published in German in 1811 and first translated ito English in 1818.

The water-sprite Undine, whose name the author took from Goethe, has been adopted and brought up by an old fisherman and his wife who have lost their own child. She meets the knight Huldbrand, who comes to the fisherman's cottage; the two fall in love and Undine marries him, only then revealing that she is not human. By the marriage she gains a soul. Huldbrand subsequently falls in love with Bertalda, who proves to be the fisherman's long-lost daughter. Undine return to her watery element, but when Huldbrand marries Bertalda the water-sprite reappears and kills the knight with a kiss.

The story, which has resemblences to The Little Mermaid by Andersen, is descended from Melusine, the French folk-tale of a water-sprite who who marries a knight on condition that he shall never see her on Saturdays, when she resumes her mermaid shape. Undine has been made ito a ballet and an opera. An unabridged English edition of the story published in 1909 has fine illustrations by Rackhan. George Macdonald thought Undine 'the most beautiful' of all fairy stories, and the references to it in such works as Charlotte Yonge's The Daisy Chain and Louisa Alcott's Little Women show that it was one of the best loved of all books for many 19th-century children.