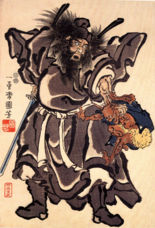 The hero Shoki slaying an oni

The word "oni" is sometimes speculated to be derived from on, the on'yomi reading of a character (隠) meaning to hide or conceal, as oni were originally invisible spirits or gods which caused disasters, disease, and other unpleasant things. These nebulous beings could also take on a variety of forms to deceive (and often devour) humans. Thus a Chinese character (鬼) meaning "ghost" came to be used for these formless creatures.

Depictions of oni (Oniwaka Mara or "little demon") vary widely but usually portray them as hideous, gigantic creatures with sharp claws, wild hair, and two long horns growing from their heads. They are humanoid for the most part, but occasionally, they are shown with unnatural features such as odd numbers of eyes or extra fingers and toes. Their skin may be any number of colors, but red and blue are particularly common.Onis could be distinguished if they're terrestrial or infernal

Oni were initially invisible, empowering mountains, the wind, thunder and other natural forces but became anthropomorphized to progressively take on its modern, ogre-like form, partly via syncretism with creatures imported by Buddhism, such as the Indian rakshasa and yaksha, the hungry ghosts called gaki, and the devilish underlings of Emma-Daio, the aka-oni (red ogre) and the ao-oni (blue or green ogre) who punish sinners in Jigoku (Hell).

The oni's most famous variation - with horns like an ox and wearing a tiger-skin fundoshi, may be related to the kimon, the demon gate through which the world's misfortunes are said to come. The gate is located in the northeast, or ushi-tora direction - Ushi and tora being the signs of the ox and the tiger.

They are often depicted carrying iron clubs, called kanabo kanabō (金棒). This image leads to the expression "oni with an iron club" (鬼に金棒), that is, to be invincible or undefeatable. It can also be used in the sense of "strong beyond strong", or having one's natural quality enhanced or supplemented by the use of some tool.

Traditionally the oni was a spirit of the mountain who was given offerings and asked to protect the town, or at least not to destroy it. Earthquakes and volcanoes were not uncommon (and still are not uncommon), and so it was believed that the oni caused these out of discontent with the people in the villages on or around the mountains they inhabited. In some places, oni were treated as deities of the mountain, to be honored and appreciated.

Some oni can also have a protective function like onigawara tiles found at the end of Japanese roofs are so called because they were originally carved in the form of an ogre's face, ferocious scowls intended to frighten away harmful spirits. On the other hand, monkey statues are thought to guard against oni, since the Japanese word for monkey, saru, is a homophone for the word for "leaving". In Japanese versions of the game tag, the player who is "it" is instead called the "oni".

On top of their immense strength and appetite, some oni are also said to shapeshift or to fly at will, allowing them to traverse great distances quickly.

Shinto priests, monks, and sorcerors typically had little to fear from oni, as holy magic and the power of deities either drove them away, defended against their attacks, or weakened them considerably. The Japanese do have a ceremony called Oni-Yarabi, which was designed to cleanse an infected area of the Oni demons. Shoki was the main person that they called on to ward them off.

In some stories it is implied that kitsune and oni do not get along. Like the Phoenix and Dragon they would appear to be foils to each other in many ways and tend to clash from time to time.

There are many stories that involve samurai who slained many oni to claim their vast treasures. This seems comparable to the Western legends of dragons, that act as genius loci that the brave knights had to defeat as rites of passage or possession.

One day Momotarou, the magical Peach-Boy, decided to go to Onigashima, the oni island, where many oni lived and had stored huge treasures they stole from the town where Momotarou's adoptive parents lived. Momotarou and his animal friends (a sparrow, a monkey, and a dog, whom he had encouraged to become friends) were able to defeat them with the help of millet dumplings made for Momotarou by his adoptive mother. The oni swore never again to menace the humans, and Momotarou took back the treasure and lived happily ever after with his family and friends.

Oni are a key part of the Japanese holiday known as setsubun. This festival marks the start of spring, and the new year in the old lunar calendar. People in ogre masks are ritually driven away, symbolically warding off misfortune and evil for the coming year. Long ago oni could be repelled by the stench of burning sardines and other methods, but today it is most popular to toss soybeans (which oni are said to hate) and shout "Oni wa soto! Fuku wa uchi!" ("Out with demons! In with happiness!").

Belief is quite strong in oni, and in fact as recently as the last century government officials sent a formal letter to oni believed to be living on a certain mountain, that they might vacate the premises so as not to endanger a visiting official. Upon first contact with Westerners, it is said that the Japanese initially believed they were oni due to their skin, hair, and size. To have "the strength of an oni" is truly impressive indeed. To be called an "oni" is to be accused of being horrible!