In medieval bestiaries, the Onocentaur (Onoscentaurus) is an African hybrid creature with the upper body of a man and the lower body of an ass. 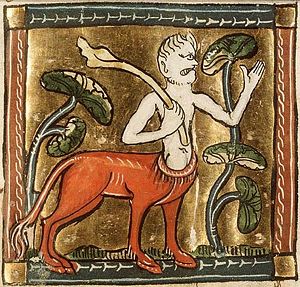 The onocentaur has the upper body of a man and the lower body of an ass. However, he is usually depicted much like the classical Centaur, carrying or using a bow, or carrying a club. It is often shown together with the siren; in British Library, Sloane MS 278 (f. 47r) both are shown together in the water, apparently attacking sailors in a ship. The Greeks and Romans later applied the name to a type of ape, possibly the chimpanzee.

The onocentaur is a symbol of male lust. The upper part is rational; the lower part is exceedingly wild. Philippe de Thaon says that man is rightly called man when he is truthful, but an ass when he does evil. The two-part nature of the beast symbolizes the hypocrite who speaks of doing good but actually does evil.

“There is a certain creature which they call an Onokentaura (Donkey-Centaur), and anybody who has seen one would never have doubted that the race of Kentauroi once existed . . . But this creature of which my discourse set out to speak, I have heard described as follows. Its face is like that of a man and is surrounded by thick hair. Its neck below its face, and its chest are also those of a man, but its teats are swelling and stand out on the breast; its shoulders, arms, and forearms, its hands too, and chest down to the waist are also those of a man. But its spine, ribs, belly and hind legs closely resemble those of an ass; likewise its colour is ashen, although beneath the flanks it inclines to white. The hands of this creature serve a double purpose, for when speed is necessary they run in front of the hind legs, and it can move quite as fast as other quadrapeds. Again, if it needs to pluck something, or to put it down, or to seize and hold it tight, what were feet become hands; it no longer walks but sits down. The creature has a violent temper. At any rate if captured it will not endure servitude and in its yearning for freedom declines all food and dies of starvation. This also is the account given by Pythagoras and attested by Krates of Pergamon in Mysia."