In Greek mythology, Orthrus (also called Orthros, Orthos, Orthus, Orth and Orphus) was a two-headed dog, serpent-tailed dog and the brother of Cerberus, both whelped by the chthonic monster Echidna by Typhon. 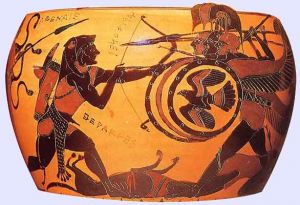 The word orthros in Greek means "morning twilight." His name was also spelt Orthos, after another word meaning "straight" or "height." http://www.theoi.com/Ther/KuonOrthros.html

Orthrus was one among Echidna's fearsome brood listed in Hesiod, Theogony (306ff). He sired with her further chthonic monstrous creatures: the Chimera, the Sphinx (Iliad ix.664), the Lernaean Hydra, and even, Hesiod says, the Nemean lion.

Orthrus was owned by the three-bodied Titan, Geryon. Orthrus and his master, Eurytion, were charged with guarding Geryon's herd of red cattle in the "sunset" land of Erytheia ("red one"), one of the islands of the Hesperides in the far west of the Mediterranean.

Orthros may have once been represented in the heavens as the constellations Canis Major and Minor, two dogs for the two heads of Orthros. The chief star of Canis Major was Seirios, the dog star, whose dawn rising was thought to bring on the scorching heat of mid-summer. Just as Orthros represented the heat of summer, his mate the Khimaira, may have presided over the frosty chill of winter, with her December rising in the form of Capricorn. However nothing survives of this in any extant collection of Greek star myths.