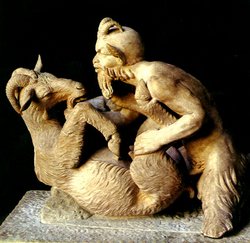 Pan (Greek Πάν, genitive Πανός) is the Greek god who watches over shepherds and their flocks. He has the hindquarters, legs, and horns of a goat, in the same manner as a satyr or pane. (The latter, sometimes called "goat-pans" in English, are in some myths descendants of Pan and may have been somewhat confused in the popular mind with the satyrs.)

The parentage of Pan is unclear; in some legends he is the son of Zeus and in some he is the son of Hermes. His mother is said to be a nymph. His nature and name is alluring, particularly since often his name is mistakenly thought to be identical to the Greek word pan, meaning "all", when in fact the name of the god is derived from the word pa-on, which means "herdsman" and shares its prefix with the modern English word "pasture". In many ways he seems to be identical to Protogonus/Phanes. If reduced to the purely symbological, Pan would be the Greek form of an ancient, possibly pre- or proto-Indo-European, horned-man deity, who would evolve into Cernunnos in the Celtic pantheon, Pashupati to the Hindus, and perhaps also the Minotaur.

Probably the beginning of the linguistic misunderstanding is the Homeric hymn to Pan, which describes him as delighting all the gods, and thus getting his name. The Roman counterpart to Pan is Faunus, (see below), another version of his name, which is at least Indo-European. But accounts of Pan's genealogy are so varied that it must lie buried deep in mythic time. Like other nature spirits, Pan appears to be older than the Twelve Olympians, if it be true that he gave Artemis her hunting dogs and taught the secret of prophecy to Apollo. Pan might be multiplied as the Panes (Burkert 1985, III.3.2; Ruck and Staples 1994 p 132<ref>Pan "even boasted that he had slept with every maenad that ever was—to facilitate that extraordinary feat, he could be multiplied into a whole brotherhood of Panes.")</ref>) or the Paniskoi. Kerenyi (1951 p 174) notes from scholia that Aeschylus in Rhesus distinguished between two Pans, one the son of Zeus and twin of Arkas, and one a son of Cronos. "In the retinue of Dionysos, or in depictions of wild landscapes, there appeared not only a great Pan, but also little Pans, Paniskoi, who played the same part as the Satyrs".

Pan was originally an Arcadian god, and Arcadia was always the principal seat of his worship. Arcadia was a district of primitive mountain folk, whom other Greeks disdained, as the Olympians patronized Pan. Arcadian hunters used to scourge the statue of the god if they had been disappointed in the chase (Theocritus. vii. 107). 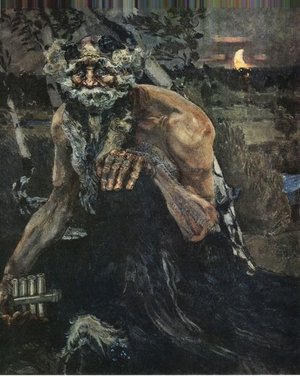 Pan inspired sudden fear in lonely places, Panic (panikon deima). Apparently when Pan was a newborn, the first onlookers saw the ugly "child" and ran in fright (or panic). Of course, Pan was later known for his music, capable of arousing inspiration, sexuality, or panic, depending on his intentions.

Pan is one of the prototype deities invoked in the neopagan archetype of the Horned God.

One of the famous legends of Pan involves the origin of his trademark pan pipes. Syrinx was a beautiful nymph beloved by the satyrs and other wood dwellers. She scorned them all. As she was returning from the hunt one day, Pan met her. She ran away and didn't stop to hear his compliments, and he pursued until she came to the bank of a river where he overtook her. She had only time to call on the water nymphs for help. Just as Pan laid hands on her, she was turned into the river reeds. When the air blew through the reeds, it produced a plaintive melody. The god took some of the reeds to make an instrument which he called a syrinx, in honor of the nymph.

Echo was a nymph who was a great singer and dancer and scorned the love of any man. This angered Pan, a lecherous god, and he instructed his followers to kill her. Echo was torn to pieces and spread all over earth. The goddess of the earth, Gaia, received the pieces of Echo, whose voice remains repeating the last words of others. In some versions, Echo and Pan first had one child: Iambe.

Pan also loved a nymph named Pitys, who was turned into a pine tree to escape him.

Pan is famous for his sexual prowess, and is often depicted with an erect phallus. He was believed by the Greeks to have plied his charms primarily on maidens and shepherds, such as Daphnis. Though he failed with Syrinx and Pitys, Pan didn't fail with the Maenads—he had every one of them, in one orgiastic riot or another. To effect this, Pan was sometimes multiplied into a whole tribe of Panes.

Once Pan had the audacity to compare his music with that of Apollo, and to challenge Apollo, the god of the lyre, to a trial of skill. Tmolus, the mountain-god, was chosen to umpire. Pan blew on his pipes, and with his rustic melody gave great satisfaction to himself and his faithful follower, Midas, who happened to be present. Then Apollo struck the strings of his lyre. Tmolus at once awarded the victory to Apollo, and all but Midas agreed with the judgment. He dissented, and questioned the justice of the award. Apollo would not suffer such a depraved pair of ears any longer, and caused them to become the ears of a donkey. 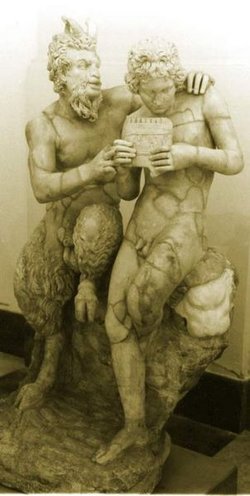 Sculpture of Pan teaching the shepherd Daphnis to play the panpipes; ca. 100 B.C. Found in Pompeii

It is likely that the demonized images of the Incubus (demon) and even the horns and cloven hooves of Satan, as depicted in much Christian literature and art, were taken from the images of the highly sexual Pan.

If one were to believe the Greek historian Plutarch (in "The Obsolescence of Oracles" (Moralia, Book 5:17)), Pan is the only Greek god who is dead. During the reign of Tiberius (A.D. 14-37), the news of Pan's death came to one Thamus, a sailor on his way to Italy by way of the island of Paxi. A divine voice hailed him across the salt water, "Thamus, are you there? When you reach Palodes, take care to proclaim that the great god Pan is dead." Which Thamus did, and the news was greeted from shore with groans and laments.

Despite the declaration of his death, however, Pan is widely worshiped by Neopagans and Wiccans today, where he is considered a powerful God and an archetype of male virility and sexuality.

Pan makes guest appearances in The Wind in the Willows, Jitterbug Perfume and The Circus of Dr. Lao.

In Roman mythology, Pan's counterpart Faunus was known as the father of Bona Dea (Fauna, his feminine side) and Latinus by the nymph Marica (who was also sometimes Faunus' mother).

Justin Martyr identified him as Lupercus ("he who wards off the wolf"), the protector of cattle, but his identification is not supported by any earlier classical sources.

Faunus was a Latin king, son of Picus and Canens. He was then revered as the god Fatuus after his death, worshipped in a sacred forest outside what is now Tivoli, but had been known since Etruscan times as Tibur, the seat of the Tiburtine Sibyl. He was associated with wolf skins, wreaths and goblets.

His festival, celebrated on the anniversary of the founding of his temple, February 15, was called the Lupercalia. His priests (Luperci) wore goat-skins and hit onlookers with goat-skin belts. The Faunalia was another festival in Faunus' honor; it took place on December 5.

In Dionysiaca by Nonnos, Faunus/Phaunos accompanied Dionysos when the latter campaigned against the Indians.

Part of this article consists of modified text from Wikipedia, and the article is therefore licensed under GFDL.
Retrieved from "https://www.monstropedia.org/index.php?title=Pan&oldid=8276"
Categories: