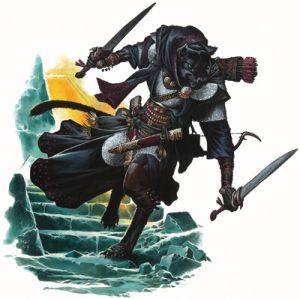 P'an Hu (Dragon dog) is the ancestor of the Yao people (a tribe located at the lower reaches of the Chang Jiang in China) and a canine shapeshifter that married an emperor's daughter and founded at least one race.

P'an Hu is represented in various Chinese legends as a supernatural dog, a dog-headed man, or a shapeshifter. When he is depicted as a shapeshifter, all of him can become human except for his head. The race(s) descended from P'an Hu were often characterized by Chinese writers as monsters who combined human and dog anatomy.

Thousands of years ago, in the country now known as China, there lived a king named Gao Xin. One day, his wife, the queen, suddenly got an excruciating earache. She suffered for three long years from the pain.

No one was able to give her relief until an old wizard came to the kingdom. The wizard took something from the queen's ear and the pain instantly went away! While nobody knew what the strange golden cocoon-like thing was that was taken from her ear, the queen decided to keep it inside a clay jar which she covered with a plate.

After a few days, a mottled dog hatched from the cocoon. Because of where it was born, the dog was named Pan (plate) Hu (jar). The dog grew fast and soon became everybody's favorite pet.

Now, Gao Xin had a rather strained relationship with Fang, the king of neighboring kingdom. Gao mentioned that anyone who brought him the head of Fang would be given the princess' hand in marriage as a reward. Upon hearing this, Pan Hu left, without anyone knowing where he had gone.

When Pan Hu returned a few days later, he was dragging Fang's head. King Gao was amazed and ordered the best roasts from the kitchen to be served to Pan Hu. The dog refused to eat. For three days, Pan Hu ate nothing. Gao Xin wondered aloud if the dog's behavior had anything to do with the fact that he hadn't kept his promise that his daughter would marry ... a dog!

To the king's surprise, Pan Hu started talking. He said that if the king didn't want his daughter to marry a dog, all the king had to do was leave Pan Hu under a golden bell for seven days. Pan Hu would then turn into a man and be able to marry the princess.

The king did as Pan Hu asked. On the sixth day, however, the princess took pity on Pan Hu, who has neither eaten nor drunk anything. She lifted the bell to offer Pan Hu something to drink. The magic was broken when the princess lifted the bell and Pan Hu could not completely change into a man. While he had a man's body, he still possessed a dog's head.

After this, the legend tells us that P'an Hu and his new wife settled in the mountains where they had 12 children, who later became the heads of 12 Yao clans. The emperor was also said to have made an imperial edict declaring P'an Hu a king. The edict also included provisions that granted he and his progeny exemption from military service and taxes. It also gave them the liberty to travel freely and cultivate their mountain land.

The Yao-minority, who live in southern China, believe they are descended from these children -- the fruits of the marriage of a princess and a dog.