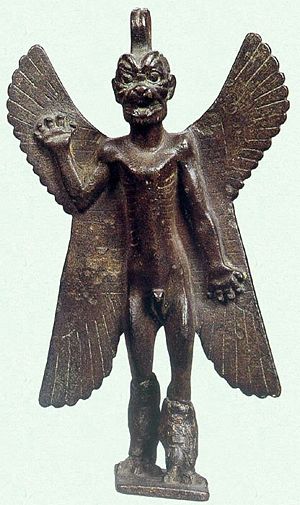 Figurine of the demon Pazuzu, cast copper or bronze, Assyrian or Babylonian, 7th century BCE. Inscription on back of figure: "I am the god Pazuzu, son of the god Hanbi, king of the evil wind demons". Height 146 mm. Musée du Louvre

In Sumerian and Akkadian mythology, Pazuzu was the king of the demons of wind, and son of the god Hanbi. For the Sumerians he also represented the southwestern wind, the bearer of storms.

Pazuzu is the demon of the South-west wind that was known for bringing droughts and famine during dry seasons, and locusts during rainy seasons.

Pazuzu is often depicted with the body of a man but with the head of a lion or dog, talons instead of feet, two pairs of wings, the tail of a scorpion and a serpentine penis. He is also depicted with the right hand upward, and the left hand downward; the position of the hands means life and death, or creation and destruction.

Pazuzu was invoked in amulets aimed at fighting against the powers of his hated rival, the malicious goddess Lamashtu, who was believed to cause harm to mother and child during childbirth. Pazuzu is also a demon who protected humans against plague and evil forces, in particular the demoness Lamashtu. 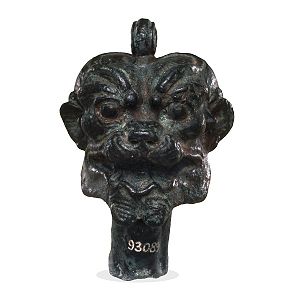 Later, when he is appointed to perform the exorcism on Regan, he suspects it is Pazuzu that possesses her. The 1977 sequel film Exorcist II: The Heretic and the 2004 prequel Exorcist: The Beginning also deals with Pazuzu.

Part of this article consists of modified text from Wikipedia, and the article is therefore licensed under GFDL.
Retrieved from "https://www.monstropedia.org/index.php?title=Pazuzu&oldid=10824"
Categories: