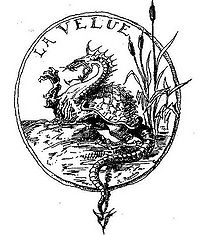 The Peluda, sometimes called the Shaggy Beast or La Velue, is a dragon-like beast that terrorized the city of La Ferté-Bernard, France, in medieval times.

Peluda is Occitan for "hairy". "La Velue" means "The Hairy One" in French, a reference to the dragon's main method of defense.

Depending on the account, the Peluda had either a thick porcupine-like body or a mess of hair-like projections hanging from its body, which could erect into quills. These quills were said to be so toxic that a single prick from the Peluda's back would kill instantly. Consistently, it was supposed to have possessed a snake's neck, head, and tail, large, tortoise-like feet, and a green color. It was the size of a large ox or bull.

The Peluda was a large and very powerful creature. Its body was inpenetrable by any weapon except for its weak spot, the tail. However, the tail was dangerous to approach, and could kill an adult man with a single strike. The poisonous stingers on the creature's body could be fired like arrows at victims. It could breathe fire from its mouth like a traditional dragon, most often using this ability to burn crops at harvest. It attacked prey by spewing a powerfully acidic venom or a stream of water. If pursued by mobs of townspeople, the dragon would retreat to the waters of the Huisne to escape them, causing terrible floods as it did so.

The lore proposed that the Peluda was denied or refused access to Noah's Ark, yet survived the biblical flood by seeking refuge in a cave near the Huisne River. After many years, it returned to rampage across the countryside, wilting crops with its breath and devouring both livestock and humans, causing terrible floods whenever townspeople attempted to chase it. It was finally defeated after it killed and dragged off a young man's fiancée. He tracked it down and cut off its tail, in some versions of the story learning of the beast's weak spot through the aid of a local wise woman. This was the only vulnerable point on the Peluda's body, and it died immediately. The creature's body was embalmed and its death celebrated.

Along the banks of the Huisne, an otherwise peaceful stream, there roamed during the Middle Ages a creature that became known as the Shaggy Beast (La Velue). This animal had somehow managed to survive the Flood despite its exclusion from the Ark. It was the size of a bull, and it had a snake's head and a round body buried under long green fur. The fur was armed with stingers whose wound was deadly. The creature also had very broad hooves that were similar to the feet of the tortoise, and its tail, shaped like a serpent, could kill men and cattle alike. When its anger was aroused, the Shaggy Beast shot out flames that withered crops. At night it raided stables. Whenever the farmers attempted to hunt it down, it hid in the waters of the Huisne, causing the river to flood its banks and drown the valley for miles.

The Shaggy Beast had a taste for innocent creatures, and devoured maidens and children. It would choose the purest of young womanhood, some Little Lamb (L'agnelle). One day, it waylaid one such Little Lamb and dragged her, mauled and bloody, to its lair in the riverbed. The victim's sweetheart tracked the monster, and with a sword sliced into the Shaggy Beast's tail, its only vulnerable spot, and cut it in two. The creature died at once. It was embalmed and its death was celebrated with fifes and drums and dancing.

-The Book of Imaginary Beings by Jorge Luis Borges