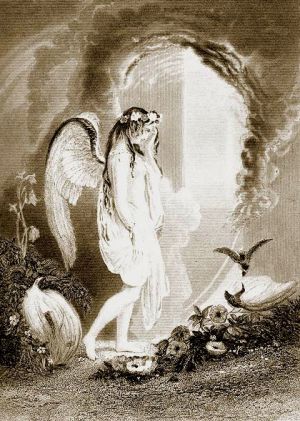 In Persian mythology, peris (Persian: پری Pari) are descended from fallen angels who have been denied paradise until they have done penance.

Peris are exquisite, winged, fairy-like creatures ranking between angels and evil spirits. In earlier sources they are described as agents of evil; later, they are benevolent.

Peris were the target of a lower level of evil beings called دیوسان divs (دَيۋَ daeva), who persecuted them by locking them in iron cages. This persecution was brought about by, as the divs perceived it, the peris' lack of sufficient self-esteem to join the rebellion against God.

Peri and the fallen warrior

In Thomas Moore's poem Paradise and the Peri, part of his Lalla-Rookh, a Peri gains entrance to heaven after three attempts at giving an angel the gift most dear to God.

The first attempt is "The last libation Liberty draws/From the heart that bleeds and breaks in her cause," to wit, a drop of blood from a young soldier killed for an attempt on the life of Mahmud of Ghazni.

Next is a "Precious sigh/of pure, self-sacrificing love": a sigh stolen from the dying lips of a maiden who died with her lover of plague in the Ruwenzori rather than surviving in exile from the disease and the lover.

The third gift, the one that gets the Peri into heaven, is a "Tear that, warm and meek/Dew'd that repentant sinner's cheek": the tear of an evil old man who repented upon seeing a child praying in the ruins of the Temple of the Sun at Balbec, Syria.

Robert Schumann set Moore's tale to music as a cantata, Paradise and the Peri, using an abridged German translation.

A humorous treatment of Peris interfering with mortal affairs is Gilbert and Sullivan's 1882 operetta Iolanthe, the subtitle of which is The Peer and the Peri. 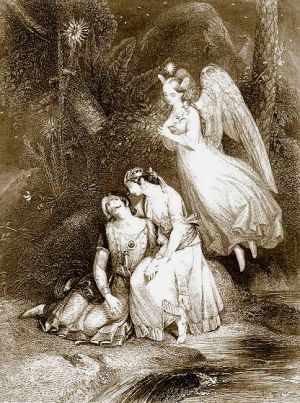