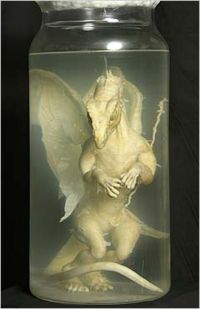 The pickled dragon in a jar.

In December 2003, David Hart claimed to have found a pickled dragon or, more precisely, what appeared to be the fetus of a winged reptile-type creature preserved in a large jar of formaldehyde in his garage in Oxfordshire, England. It was later revealed that he and his friend Allistair Mitchell had perpetrated the hoax in order to promote a novel written by Mitchell.

According to the story, David Hart's grandfather, said to have been a porter at the museum, saved the specimen from being destroyed; it had then been left in a crate in his garage by Hart's father and had remained there for twenty years before being "rediscovered".

In reality the dragon was made by the model makers behind the BBC TV series Walking with Dinosaurs and the jar was made by a specialist glass blowing studio.

Part of this article consists of modified text from Wikipedia, and the article is therefore licensed under GFDL.
Retrieved from "https://www.monstropedia.org/index.php?title=Pickled_dragon&oldid=11481"
Categories: