Pinhead is a fictional character from Clive Barker's Hellraiser universe. He is portrayed in the movies by actor Doug Bradley.

In the original film, Pinhead did not have a name, but was simply credited as the "Lead Cenobite". Pinhead was a name coined by the makeup crew that applied the prosthetics on Bradley to distinguish the Cenobites. Clive Barker has voiced his intention to kill off Pinhead in a future short story, saying: "I want to give Pinhead a good send-off. I want to do it right. If we are going to get rid of the old guy, let's do it with some style."

Pinhead was not always a Cenobite, but was in fact once human. Pinhead originated as Captain Elliott Spencer, who was born into the middle class British society of the Victorian Era in 1888.

He joined the British Expeditionary Force, eventually rising to the rank of Captain and served during World War I. Spencer was a charismatic and eloquent man, who could feel great empathy and compassion for those around him. These are factors which undoubtedly assisted in his mental breakdown which he suffered after the Battle of Flanders in 1914. Spencer did not believe he had a right to live after watching many of his comrades perish in horrific circumstances. He had also lost faith in the human race after witnessing the inhumanity one individual could enact upon another. He had lost faith in God, who he believed had failed humanity, claiming "God fell at Flanders too."

Whilst other survivors of the war turned to religion, philosophy, music, art and poetry, the disillusioned and jaded Spencer wandered the world and became something of a hedonist, turning to the baser methods of gratification for satisfaction and pleasure. These included opium, alcohol, and sex; however these were insufficient, as the sensations were never strong enough and Spencer always wanted greater highs, leading to his dabbling in the Occult, Satanism and black magic. By his own definition, he had become "an explorer of forbidden pleasures." He had indeed become a lost soul, descending deeper and deeper into madness and eventually sadomasochism as pain became indistinguishable from pleasure.

His transformation into Pinhead (a.k.a. "Lead Cenobite", "The Angel of Suffering" "Leviathan's Lord of the Damned" and "The Dark Prince of Pain") occurred when he opened the demonic Lament Configuration, which he picked up from a market in India in 1921. In the Hellraiser comic book series, Pinhead is depicted as the latest incarnation of the Cenobite spirit Xipe Totec, an entity derived from Aztec mythology.

Pinhead's role has varied with each Hellraiser installment. In the original Hellraiser, Pinhead was simply the "Lead Cenobite" and was part of a collective group giving pleasure and pain to those who opened the box. They were not evil as such, simply a force or group of tragic characters that existed to explore experience. The second film followed this but the third film radically changed the original concept, making Pinhead and the Cenobites into typical Hollywood monsters. In the fourth film he is presented as a demon of Hell bent on world domination, and by the fifth he simply tortures those who solve the box. The seventh film reverts closer to the original film, with the Cenobites responsible for pleasure and pain, but the characters seem more demonic as in later installments. In the Hellraiser comic book series, it would seem that Leviathan might be considered the overlord of the Cenobite world.

The character of Pinhead presented something of a departure from the horror movie villains popular at the time. Unlike Leatherface, Jason Voorhees and Michael Myers, he can and does speak. However, he is rarely comical, as are Freddy Krueger or Chucky. When he does indulge in humour, it is notably dry. Another difference between Pinhead and other film killers, supernatural or otherwise, is his need to have been purposely summoned, as The Lament Configuration must be opened for the Cenobites to enter the corporeal world. Pinhead does not kill indiscriminately, nor for vengeance; he kills because he was conjured from Hell by the opener of the puzzle box. Like very few other film killers, Pinhead is sometimes portrayed as a tragic villain when his origin of how he became Pinhead was explored in Hellbound: Hellraiser II and Hellraiser III: Hell on Earth. He also has characteristics of both an anti-villain and an anti-hero because in the second film, he was able to regain some of his humanity when he recollects his memory of his former life and tries to protect Kirsty and Tiffany from the insane Channard Cenobite.

Pinhead's other difference from typical film killers is that he can be reasoned and bargained with. In both Hellraiser and Hellraiser: Hellseeker, the Kirsty character bargains with Pinhead to offer him more "souls" in exchange for her own (in particular, her human adversaries), thus resulting in her life being spared. Pinhead does not kill quickly, as he and the other Cenobites are well-versed in torture. Death does not end the suffering of his victims either, as they are brought to Hell/The Labyrinth, where, Pinhead says, "We have an eternity to know your flesh." Sometimes he stands back as the other Cenobites under his command do the actual killing. Pinhead is obsessed with pain and exploring the limits of the flesh, calmly observing his "experiments" as they suffer under the ministrations of him and fellow members of his order.

The act of opening The Lament Configuration is not always sufficient reason to be killed: in Hellbound: Hellraiser II, Pinhead stops the Cenobites from killing Tiffany, an emotionally traumatized girl who opened the box only after being manipulated by Dr. Channard. Pinhead remarks, “…it is not hands that call us, it is desire…” Later in the film Pinhead is killed by Dr. Channard who is by then a Cenobite himself, but not before Channard returns Pinhead to his original human form, as opposed to the other Cenobites, who were killed outright and then returned to their human forms upon dying. In the third film, the reborn Pinhead becomes the main villain and he completely loses his humanity (as a result of his rebirth), making him pure evil and able to kill for enjoyment.

He very rarely speaks to his subordinates and usually does so only when issuing an order. Only Cenobites of comparable ranking to himself, such as the Cenobite Princess Angelique, are spoken to as equals. 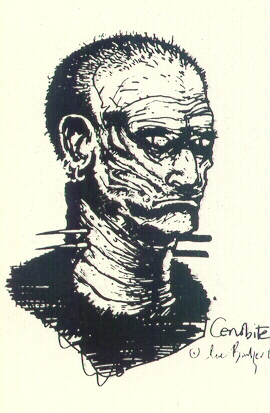 A drawing by the original creator of pinhead: Clive Barker

Pinhead is an extremely powerful being, and as such, has several supernatural abilities. He is virtually unstoppable and invulnerable in the physical sense, but rarely engages in physical combat, instead letting hooked chains do his bidding. His preferred method of attack is by summoning hooks and chains to mutilate victims, often pulling said victims in several directions to tear them apart. These chains are subject to his total mental control and he may direct them at will. The chains may even change shape after having attached to a victim. Pinhead is highly resistant to damage and direct assault, able to shrug off all but the most potent attacks.

His magic is also used for creating objects out of thin air, teleporting, creating explosions at distances and deceiving opponents with illusions. Pinhead is also familiar with the Occult and magic, with an ability to read minds. He is at once charismatic and terrifying, and can often persuade others to perform horrific acts to his favour. ] It is not known if Pinhead's power exceeds that of other Cenobites, although he was once killed by the Channard Cenobite after remembering his human life. In Parts 3 and 4, Pinhead creates Cenobites from his victims, which tend to be physically manipulated to resemble an aspect of their human lives with special abilities granted in the process. Pinhead is rarely without an entourage of such beings.

When the Pinhead character's inhuman evil (Unbound Pinhead) manifests in the world in Hellraiser III: Hell on Earth, it seems to have nearly unlimited and highly versatile powers. He could telekinetically control vast areas, transfer matter to different forms whether it be living or non living, create and control fire, animate objects, and the like. Towards the end of the film, Pinhead's human side suggests that he is no longer bound by the rules governing other Cenobites (suggesting others among them might have such power).

Part of this article consists of modified text from Wikipedia, and the article is therefore licensed under GFDL.
Retrieved from "https://www.monstropedia.org/index.php?title=Pinhead&oldid=14401"
Categories: