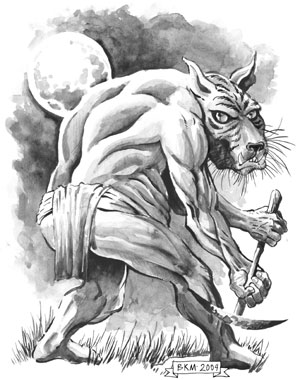 In Hindu folklore, the pisacha (literally, "eater of raw flesh") is a vampiric spirit often associated with the vetala and the rakshasa but of a lower order than both of these creatures. The name pisacha is occasionally used in a way that includes all the ghosts, goblins and vampires that haunt cemeteries and ruins in India.

Their name appears in the Atharva Veda. The Kashmir tradition holds that they lived in central Asia.

Pisachas are the lowest form of the demons and are considered cruel, barbaric, and eaters of raw flesh. Pisachas are said to be hideous in appearance and blood thirsty.

Pisachas haunt charnel grounds and cross-roads. They are blamed as the cause of many illnesses. But, if offered rice at a cross-road by one of his victims in a ceremony that is repeated for days, he might restore his health. The lowest form of marriage, by rape is associated with them.

According to Akhtar Muhi-ud-Din the Dard, the Naga and the Pisacha were three different names of the aboriginal inhabitants of Kashmir with repositories of a rich culture and language. They were called Nagas because of their religious beliefs at whose centre was their reverence of the serpent (the Naga). They were known as Pisachas for their meat-eating and Dards or Dravads because they belonged to the Dravidian stock and spoke a language which belongs to the Dardic group of languages.

The Burzahom excavations have conclusively shown that the civilization of the original inhabitants of Kashmir was as advanced and sophisticated as the Indus Valley civilization. The Katha-sarit-sagara, a famous 11th century CE collection of Indian legends, fairy tales and folk claims to be a mainly based on Gunadhya's Brhat-katha written in Paisachi dialect from the south of India.