Pixies are mythical creatures of English folklore sometimes also referred to as piskies/piskeys or the little people. 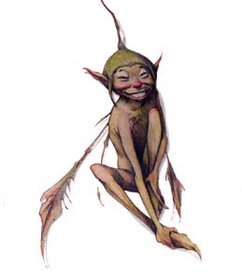 They are usually depicted as wingless, with pointed ears, and often wearing a green outfit and pointed hat. Sometimes their eyes are described as being pointed upwards at the temple ends.