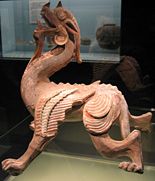 Pixiu or Pi Yao (Chinese: 貔貅; pinyin: pí xiū) is a Chinese mythical hybrid creature and a protector to practitioners of Feng Shui.

Pixiu resembles a winged Chinese lion. Fierce looking and covered with whitish-grey fur, Pi Xiu has the head of a Chinese dragon, Ancient Chinese depictions of Pi Xiu show the male with the single antler, and the female with two but is commonly depicted with only one antler as time passes. As with the Chinese Phoenix, the common image today is a representation of a single sex. Pi Xiu has protruding eyes and sharp teeth. It does not have an anus but a big opened mouth ready to gobble up fortune.

There are two different types of Pi Xiu. The difference is with their horns. The one with two horns is known as Pi Ya (possibly a corruption from bi xie (辟邪)) and the one with one horn is called Tian Lu (天祿). Due to their similar appearances, the Pixiu is often confused with fu Dogs or qilin.

Pi Xiu is the ninth offspring of the dragon. Pi Xiu craves the smell of gold and silver and it likes to bring his master money in his mouth. Statues of this creature are often used to attract wealth in feng shui.

Pixiu is an earth and sea variation, particularly an influential and auspicious creature for wealth. It is said to have a voracious appetite towards only gold and silver.

Therefore traditionally to the Chinese, Pixiu has always been regarded as an auspicious creature that possessed mystical power capable of drawing Yin Qi (陰氣) from all directions.

Thus, it is helpful for those who are going through a bad year according to Chinese zodiac. It is believed that the common wingless Pi Xiu assists in seeking wealth while a winged Pi Xiu assists students in furthering their studies.

The large fangs visible in the creature's mouth are used to attack demons and evil spirits, draining their essence and converting it to wealth. Pi Xiu also guards against disease caused by these same evil spirits.

The myth of Pi Xiu tells that the creature violated a law of heaven, so the Jade Emperor punished it by restricting the pixiu's diet to gold, and prevented the creature from defecating by sealing its anus. Thus, pixiu can only absorb gold, but cannot expel it. This is the origin of Pi Xiu's status as a symbol of the acquisition and preservation of wealth. 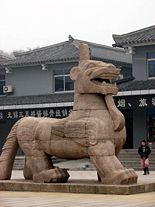 During China's history, Pi Xiu were commonly displayed in ancient architecture to ward off Yin Qi and to harness auspicious Qi. The statues of a Pixiu are commonly found on the four corners of the roofs of houses--usually houses of important people such as the emperor. The Pixiu is lined 5th, behind the dragon, phoenix, winged horse and sea horse. In ancient China, statues of Pi Xiu were also used as tomb guardians.