A Pontianak or Matianak or Kuntilanak (as known in Indonesia, sometimes shortened to just kunti) is a type of vampire in Malay folklore. 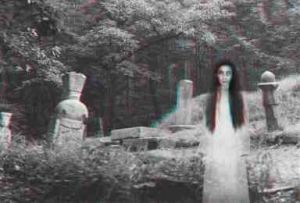 The pontaniak is known in Philippine, Malaysia and Indonesia. It is often confused or merged with other similar creatures.

According to some Philippine lore, an infant who dies under certain conditions may become a vampire called the tiyanak, tianak or patianiak. It often appears as a crying baby in the woods. Unsuspecting passersby will think it to be an abandoned baby and will bring it home. Once inside, it will change into its original grotesque shape and attack the inhabitants while they sleep.

In the article “Philippine (Tagalog) Superstitions”, Fletcher Gardner (Journal of American Folk-Lore vol. 19 (1906)) described it as “the soul of an unbaptized child living again in a new body in the forest, sucking the blood of any unfortunate woman whom it may find asleep, or who, in compassion, may give it suck.”

Part of this article consists of modified text from Wikipedia, and the article is therefore licensed under GFDL.
Retrieved from "https://www.monstropedia.org/index.php?title=Pontianak&oldid=8790"
Categories: