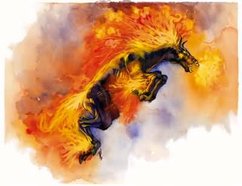 The Púca is a fairy creature of Celtic folklore, notably in Ireland and Wales. The Púca is considered by many to be the most terrifying of all faery creatures. One reason for this is its appearance, but its powers are also feared.

From the Old Irish poc, 'a male goat'. Another plausible origin is the Scandinavian pook or puke, meaning 'nature spirit'. In Ireland, small mountain lakes and springs are sometimes known as the pollaphuca, or the Phooka’s Pool. Many of these waters originate or are within close proximity to the River Bann and the River Liffey. Many of the pollaphuca have been renamed in more Catholic time to St. Patrick’s Well. The poula phook, is the name of a waterfall that can be found in the Wicklow mountains where the River Liffey flows, but it is also a term that can be used to describe almost any cave or hole in the ground.

According to legend, the Púca is an adroit shapeshifter, capable of assuming a variety of terrifying forms. It may appear as an eagle or as a large black goat, but it most commonly takes the form of a beautiful and sleek horse, dark and wild in countenance, with a long mane and sulphurous yellow eyes. In parts of County Laois, the pooka becomes a huge, hairy bogeyman who terrifies those abroad at night; in Waterford and Wexford, it appears as an eagle with a massive wingspan; and in Roscommon, as a black goat with curling horns.

This depiction of the phooka also harkens back to the folkloric depictions of the Catholic devil as a horned and cloven-hoofed creature that appears as half-human and half-goat. In many ways this countenance is also reminiscent of a satyr or the appearance of Shakespeare’s Puck character in his play, A Midsummer’s Nights Dream.

By the beginning of the 21st century, depictions and conceptions of the Púca have changed from a fierce, terrifying spirit to a harmless, shy, garden-gnomish.

The Púca is a creature of the mountains and hills that has the power of human speech, and in those regions there are stories of it appearing on November Day and providing prophecies and warnings to those who consult it. Something similar seems to have occurred in south Fermanagh, where the tradition of gathering on certain high places to await a speaking horse was observed on Bilberry Sunday until quite recently. According to folklorist Douglas Hyde, it was accustomed to give "intelligent and proper answers to those who consulted it concerning all that would befall them until November the next year. And the people used to leave gifts and presents at the hill..."

Some bits of folklore states that the phooka is only visible to the person to whom it attaches itself.

The Púca has been said to call those it feels have slighted or offended it out of their homes for a ride. If they fail to appear, it will tear down fences, scatter livestock, and create general mayhem in the landowner’s property.

The Pooka is also said to waylay travellers and others about at night, and if it is able to toss them onto its back, it will, at very least, provide them with the ride of their lives, from which they will return forever changed. It is even believed that it may act just like the kelpie. If it is ever taken next to a river or pond, it will carry its helpless rider into the water and rip him to pieces. Some stories refer to the use of three of the hairs from a phooka in the making of the bridle and that the power would be granted to the person using it to capture the creature.

In some regions, the Púca is spoken of with considerably more respect than fear; if treated with due deference, it may actually be beneficial to those who encounter it.

Only one man has ever managed to ride the pooka and that was Brian Boru, the High King of Ireland. Using a special bridle containing three hairs from the pooka's tail, Brian managed to control the magic horse and stay on its back until, exhausted, it surrendered to his will. The king extracted two promises from it; firstly, that it would no longer torment Christian people and ruin their property and secondly, that it would never again attack an Irishman (all other nationalities are exempt) except those who are drunk or abroad with an evil intent. The latter it could attack with greater ferocity than before. The pooka agreed to these conditions. However, over the intervening years, it seems to have forgotten its bargain and attacks on property and sober travellers on their way home continue to this day.

Certain agricultural traditions surround the Púca. It is a creature associated with Samhain, the third Pagan (Celtic, Wiccan) Harvest Festival, when the last of the crops is brought in. Anything remaining in the fields is considered "puka," or fairy-blasted, and hence inedible.

In remote areas of County Down, the pooka becomes a small, deformed goblin who demands a share of the crop at the end of the harvest: for this reason several strands, known as the 'pooka's share', are left behind by the reapers. Nonetheless, November Day (November 1) is the Púca's day, and the one day of the year when it can be expected to behave civilly.

The Púca na Samhna emerges from Croagh Patrick in Co. Leinster at Samhain and will speak to people of the coming year and foretells the events that might befall them during that time. In past times, gifts were left for the phooka at the mountain. But, this tradition has ceased due to the rise in Catholicism and the presence of the clergy. In the case of the story of the piper and the phooka from the “Leabhar Sgeulaigheachta,” the phooka conveyed the piper to the sidhe mound at Croagh Patrick and back again without causing him any harm.

In Co. Roscommon the phooka is said to appear as a black goat with large curling horns. However, in Killorglin, Co. Kerry, there is also a three-day festival that is held in mid-August known as the Puck Fair. A wild goat, or puck, is brought down from the mountains and is crowned as king. The definitive history of the festival remains unknown, but the fair has been held since 1603 and is probably older than that. During the English occupation, it is said that a goat broke away from its herd and alerted the nearby town of Killorglin of danger of an approaching army. In that goat’s honor, the recent Puck Fair was born. Perhaps we can speculate that it was indeed one of the phooka that came to the aid of the people? We will never know…

In Co. Fermanagh there lies the Binlaughlin Mountain is also known as the ‘peak of the speaking horse’. In the south of the county there was even a tradition of gathering at certain high places, such as the tops of mountains, to wait for the speaking horse, or phooka, to appear. This occurred on Bilberry Sunday, or what some prefer to refer to as Lughnasdah.

Throughout Ireland, the blackberries are considered to belong to the phooka and that they are spoiled and no longer edible after the first of November which commemorates the beginning of winter. Some say that the phooka has spit on them, but this seems odd as the act of spitting can be seen as a blessing rather than a curse. But the sentiment is apparent in other bits of folklore that state that the phooka either urinated or defecated on the blackberries!

In other areas of Ireland, the blackberries are considered to belong to the phooka after Michaelsmas has passed. It is said that Michaelsmas was the date on which the Catholic devil was thrown out of heaven and landed on a blackberry bramble. In his anger, he cursed the bush and performed several heinous acts that consequently made the berries inedible.

"Amongst the rest was a good fellow devill So called in kindness, cause he did no evill, Known by the name of Robin (as we heare) And that his eyes as big as saucers were, Who came at nights, and would make kitchens cleane And in the bed bepinch a lazy queane, Was much in Milles about the grinding meale (And sure I take it, taught the Miller steale), Among the creame bowles, and milk pans would be, And with the country wenches, who but hee." - The Devil is an Ass