In Greek mythology Python was the earth-dragon of Delphi, always represented in the vase-paintings and by sculptors as a serpent. It lived in a cave and guarded the oracle of Delphi on mount Parnassus.

Python (sometimes called "Delphyne" lit. from Delphes) was the child of Gaia, the goddess earth and was produced from the slime and mud that was left on the earth by the great flood of Deucalion. She is sometimes equated with Echidna, a monster with the head and torso of woman, but the lower part of a snake, and was the consort Typhon.

The priestess of the oracle at Delphi became known as the Pythia, after the place-name Pytho, which was named after the rotting (πύθειν) of the serpent's corpse after she was slain. 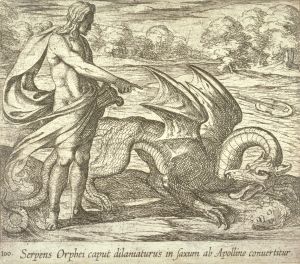 There are various versions of Python's birth and death at the hands of Apollo. In the earliest, the Homeric Hymn to Apollo, little detail is given about Apollo's combat with the serpent or her parentage.

No man dared to approach the beast and the people asked Apollo for help. He came down from Mount Olympus with his silver bow and golden arrows. With using only one arrow he killed the serpent and claimed the oracle for himself. After that, he was known as Pythian Apollo. In memory of this victory, Apollo started the Pythian games, which were held every four years. The old name of Delphi, Pytho, refers to the serpent.

The version related by Hyginus holds that when Zeus lay with the goddess Leto, and she was to deliver Artemis and Apollo, Hera sent Python to pursue her throughout the lands, so that she could not be delivered wherever the sun shone.

Thus when the infant was grown he pursued the python, making his way straight for Mount Parnassus where the serpent dwelled, and chased it to the oracle of Gaia at Delphi, and dared to penetrate the sacred precinct and kill it with his arrows beside the rock cleft where the priestess sat on her tripod.