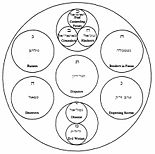 The Qliphoth are shells around the Sephirot.

The Qliphoth, kliffoth, klippot or kellipot are demonic or entropic beings in the universe, and the shadows of the positive or chaotic beings known as the Sephiroth in the mystical teachings of Judaism (such as in the Kabbalah.).

The Qliphoth are, much like the sephiroth, interpreted as mystical worlds or entities, and merged with ideas derived from demonology. They are the chaotic forces that are unleashed when one of the Sephirot is not in balance with the others.

The Seven Infernal Habitations or seven hells (Tehom, Abaddon, Titahion, Barshacheth, Tzelmoth, Shaarimoth and Gehinnom), twelve Qliphotic orders of demons, three powers before Satan and twenty-two demons which correspond to the 22 letters of the Hebrew alphabet.