The Questing Beast, or the Beast Glatisant (Barking Beast), is a monster from Arthurian legend, the subject of quests by famous knights like King Pellinore, Sir Palamedes, and Sir Percival. 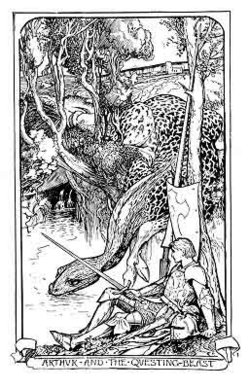 Arthur and the Questing Beast

The strange creature has the head and neck of a serpent, the body of a leopard, the haunches of a lion and the feet of a hart. Its name comes from the great noise it emits from its belly, a barking like "thirty couple hounds questing".

The first accounts of the beast are in the Perlesvaus and the Post-Vulgate Suite du Merlin. The Post-Vulgate's account, which is taken up in Thomas Malory's Le Morte d'Arthur, has the Questing Beast appear to King Arthur after he has had an affair with his sister Morgause and begotten Mordred (they did not know they were related). Arthur sees the beast drinking from a pool just after he wakes from a disturbing dream that fortells Mordred's destruction of the realm; he is then approached by King Pellinore who reveals it is his family quest to hunt the beast. Merlin reveals the Questing Beast had been borne of a human woman, a princess who lusted after her own brother. She slept with a devil who had promised to make the boy love her, but the devil manipulated her into accusing her brother of rape. Their father had him torn apart by dogs, but before he died he prophesied his sister would give birth to an abomination that would make the same sounds as the pack of dogs that killed him. The beast has been taken as a symbol of the incest, violence, and chaos that eventually destroys Arthur's kingdom.

The Perlesvaus offers an entirely different depiction of the Questing Beast. There, it is described it as pure white, smaller than a fox, and beautiful to look at. The noise from its belly is the sound of its offspring who tear the creature apart from the inside; the author takes the beast as a symbol of Christ, destroyed by the followers of the Old Law, the Twelve Tribes of Israel. Gerbert de Montreuil provides a similar vision of the Questing Beast in his Continuation of Perceval, the Story of the Grail, though he says it is "wondrously large" and interprets the noise and subsequent gruesome death by its own offspring as a symbol of impious churchgoers who disturb the sanctity of Mass by talking. Later in the Post-Vulgate, the Prose Tristan and the sections of Malory based on those works, the Saracen knight Sir Palamedes hunts the Questing Beast. It is a futile venture, much like his love for Sir Tristan's paramour Iseult, offering him nothing but hardship. In the Post-Vulgate, his conversion to Christianity allows him relief from his endless worldly pursuits, and he finally slays the creature during the Grail Quest after he, Percival and Galahad have chased it into a lake. The Questing Beast appears in many later works as well, including stories written in French, Spanish, and Italian. [edit]

T. H. White re-envisions the Questing Beast's role in his novel The Once and Future King. As King Pellinore describes it, the hunt of the beast has always been the burden of the Pellinores, and all Pellinores are in fact trained for the hunt from birth (a training which does not seem to extend much beyond finding the beast's fewmets; Pellinore as described by White is more of a comic character than a great hunter or knight). Having searched fruitlessly all his life for the beast, Pellinore is convinced by his friend Sir Grummore Grummursum to drop his quest. However, when it turns out later that the beast had been pining away for lack of attention, King Pellinore nurses it back to health and resumes his Sisyphean hunt. Later on it falls in love with Sir Palomides, who has disguised himself and Grummore as a beast to raise Pellinore's spirits when the real Glatisant can't be found. White explains that this is why Palomides hunts the beast later in Malory's work.