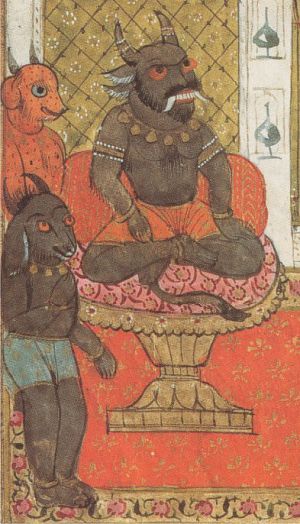 They are not all equally bad, but have been classified as of three types: one as a set of beings like the Yakshas, another as a sort of Titans or enemies of the gods, and lastly, as blood-drinking ghouls which has become the most common use.

In the popular lore, rakshasas are demons and fiends who haunt cemeteries, disturb sacrifices, harass priests, possess and devour human beings, and vex and afflict mankind in all sorts of ways. They are said to drink blood and preferred to attack infants and pregnant women.

When they show up as monsters, they are usually described as yellow, green, or blue with vertical slits for eyes, large bellies, fangs and poisonous fingernails. They also stink because they feed on human flesh and spoiled food.

Rakshasas have the power to change their shape at will and appear as animals (large birds), as monsters, or in the case of the female demons, as beautiful women. Hanuman, during a visit to the rakshasas' home in Lanka, observed that the demons could come in any form imaginable. It is believed that many Rakshasa were particularly wicked humans in previous incarnations. They are most powerful in the evening, particularly during the dark period of the new moon, but they are dispelled by the rising sun.

They are descended, like Ravana himself, from the sage Pulastya. The Vishnu Purana also makes them descendants of Kasyapa and Khasa, a daughter of Daksha, through their son Rakshas. Other sources refer to the rakshasas as children of the Vedic goddess of death, Nirriti, and her consort Nirrita.

According to the Ramayana they sprang from Brahma's foot. When Brahma created the waters, he formed certain beings to guard them who were called Rakshasas (from the root raksh, to guard).

By other accounts, he was a son of Ravana and Mandodari. Prahasta leds Ravana's army in the wars against Yama, Kubera and the Devas, and the Asuras and Daityas, through which Ravana establishes his sovereignty over the three worlds. He also leads the initial Lankan response to the invasion led by Rama, Lakshmana, Sugriva and the Vanara Army. Prahasta is slain by Rama during the Ramayana war.

In the Mahabharata, Ghatotkacha was summoned by Bhima to fight on the Pandava side in the Kurukshetra battle. Invoking his magical powers, he wrought great havoc in the Kaurava army. In particular after the death of Jayadratha, when the battle continued on past sunset, his powers were at their most effective (at night).

At this point in the battle, the Kaurava leader Duryodhana appealed to his best fighter, Karna, to kill Ghatotkacha as the whole Kaurava army was coming close to annihilation due to his ceaseless strikes from the air. Karna possessed a divine weapon, or shakti, granted by the god Indra. It could be used only once, and Karna had been saving it to use on his arch-enemy, the best Pandava fighter, Arjuna.

Loyal Karna, unable to refuse the request of Duryodhana whose cause he had pledged himself to serve, hurled the missile at Ghatotkacha, killing him[3]. This is considered to be the turning point of the war. After his death, the Pandava counselor Krishna smiled, as he considered the war to have been won for the Pandavas now that Karna no longer had a divine weapon to use in fighting Arjuna.

It is thought that the Rakshasas of the epic poems were the rude and cannibalistic barbarian races of India who were subdued by the Aryans.