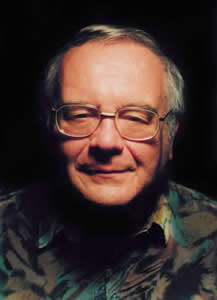 John Ramsey Campbell (born January 4, 1946 in Liverpool) is a British writer, who is considered by many literary critics to be one of the greatest masters of horror fiction.

His early work was greatly influenced by the work of H. P. Lovecraft; his first collection, The Inhabitant of the Lake and Less Welcome Tenants, is a volume of Cthulhu Mythos stories published by Arkham House in 1964. At the suggestion of August Derleth, he rewrote many of his earliest stories, which he had originally set in the Massachusetts locales of Arkham, Dunwich and Innsmouth, and relocated them to English settings in and around the fictional Gloucestershire town of Brichester, near the River Severn, creating his own Severn Valley milieu for Lovecraftian horrors.

With the groundbreaking collection Demons by Daylight (1973), Campbell set out to be as unlike Lovecraft as possible, although the book did include "The Franklyn Paragraphs", which effectively uses Lovecraft's documentary narrative technique without slipping into parody of his writing style. Other tales, such as "The End of a Summer's Day" and "Concussion", show the emergence of Campbell's mature, highly distinctive style, characterised by an intense psychological focus - often centred on a disturbed or even distorted consciousness - a rich use of metaphor to vivify imagery and evoke atmosphere and setting, and sly misdirection calculated to catch even the most cautious reader off guard. Campbell has published a number of other collections since; many of his best stories can be found in the 1993 collection Alone with the Horrors.

Campbell has written many novels, both supernatural and non-supernatural. They include The Face That Must Die (issued in a badly cut version in 1979 and in a revised edition in 1983), the story of a homophobic serial killer told largely from the killer's point of view. A more sympathetic serial murderer appears in the later novel The Count of Eleven (1991), which displays Campbell's gift for word play, and which the author has said is disturbing "because it doesn't stop being funny when you think it should". Other non-supernatural novels, such as The One Safe Place (1995), use well-drawn characters and a highly charged thriller narrative to examine social problems such as the deprivation and abuse of children.

Campbell's supernatural horror novels include Incarnate (1983), in which the boundaries between dream and reality are gradually broken down; and Midnight Sun (1990), in which an alien entity apparently seeks entry to the world through the mind of a children's writer. In its fusion of horror with awe, Midnight Sun shows the influence of Algernon Blackwood and Arthur Machen as well as Lovecraft. Also notable is the novella Needing Ghosts, a nightmarish work that seamlessly blends the horrific and the comic.

Campbell has also edited a number of anthologies, including New Tales of the Cthulhu Mythos (1980), New Terrors (1980) and (with Stephen Jones) the first five volumes of the annual Best New Horror series (1990-1994). His 1992 anthology Uncanny Banquet was notable for reprinting the obscure 1914 horror novel The Hole of the Pit by "Adrian Ross" (Arthur Reed Ropes).

He is married with two children, Tamsin and Matthew, and still lives on Merseyside. A lifelong enthusiast of film, he reviews films and DVDs weekly for BBC Radio Merseyside.

There is an extensive critical analysis of Campbell's work in S. T. Joshi's book The Modern Weird Tale (2001). Joshi has also written a book-length study, Ramsey Campbell and Modern Horror Fiction (2001), and edited The Count of Thirty (Necronomicon Press 1994), which contains critical appreciations by various authors and a long interview with Campbell himself.