Rat kings are composite creatures formed when several rats become permanently intertwined at their tails, which become stuck together with blood, dirt, and excrement. Most authors presume the creatures are legendary and that all supposed physical evidence is hoaxed, such as mummified groups of dead rats with their tails tied together. 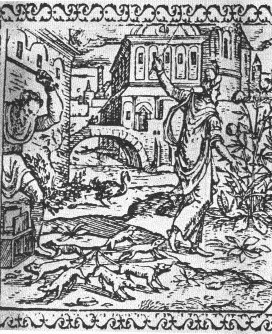 The animals reputedly grow together while joined at the tails, until it forms a single multishape entity. The numbers of rats that are joined together can vary, but naturally rat kings formed from a larger number of rats are rarer. The phenomenon is particularly associated with Germany, where the majority of instances have been reported.

Historically, rat kings were seen as an extremely bad omen, particularly associated with plagues. This is a reasonable conclusion if they are formed naturally, since large populations of rats housed in insufficient space generally bring with them disease and pestilence. With an increase in the size of the rat population comes an increase of the chance of outbreak of disease — for example, the Black Death, which is spread by the rats’ fleas.

The earliest report of rat kings comes from 1564. If real, the phenomenon may have diminished when the brown rat (Rattus norvegicus) displaced the black rat (R. rattus) in the 18th century. Sightings have been sporadic in the modern era; most recently comes an Estonian farmer's discovery in the Võrumaa region[2] on January 16, 2005. Most extant examples are formed from black rats (R. rattus). The only find involving sawah rats (Rattus rattus brevicaudatus) occurred on March 23, 1918, in Bogor on Java, where a rat king of ten young field rats was found. Similar attachments have been reported in other species: in April 1929, a group of young forest mice (Apodemus sylvaticus) was reported in Holstein; and there have been reports of squirrel kings. The Tartu Ulikooli Zooloogiamuuseum (Museum of Zoology in Tartu, Estonia) has a specimen. The Zoological Institute of the University of Hamburg allegedly owns a specimen. 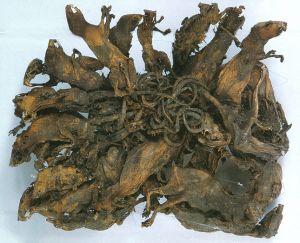 Specimens of purported rat kings are kept in some museums. The museum Mauritianum in Altenburg (Thuringia) shows the largest well-known mummified "rat king", which was found in 1828 in a miller's fireplace at Buchheim. It consists of 32 rats. Alcohol-preserved rat kings are shown in museums in Hamburg, Hamelin, Göttingen, and Stuttgart. A rat king found in 1930 in New Zealand, displayed in the Otago Museum in Dunedin, was composed of immature Rattus rattus whose tails were entangled by horse hair.[1] Relatively few rat kings have been discovered; depending on the source, the number of reported instances varies between 35 and 50 finds. 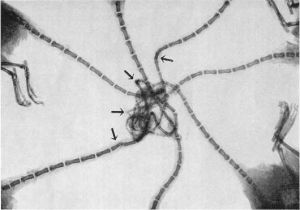 The rat king discovered in 1963 by the farmer P. van Nijnatten at Rucphen (Netherlands) as published by cryptozoologist M. Schneider consists of seven rats. X-ray images[3] show formations of callus at the fractures of their tails which according to proponents show that the animals survived an extended period of time with the tails tangled. [3]

The term rat king has often led to the misconception of a king of rats. This idea has been particularly appealing to the literary and artistic mindset: The Nutcracker, by Pyotr Ilyich Tchaikovsky, adapts a tale by E. T. A. Hoffmann that features a seven-headed Mouse King as the villain. Another example is the fairy tale Rattenkönig Birlibi, by Ernst Moritz Arndt.

Today, the rat king appears in novels such as China Miéville's King Rat, The Tale of One Bad Rat by Bryan Talbot, Ratking by Michael Dibdin, Peeps by Scott Westerfeld, Rats and Gargoyles by Mary Gentle and The Amazing Maurice and his Educated Rodents by Terry Pratchett. A rat king portentously appears in a sub-section of the same name in E. Annie Proulx's fictional work Accordion Crimes.