A roc or rukh (from Persian رخ rokh) is a mythical bird, often white, of enormous size and strength that is reputed to have been able to carry off and eat elephants which was popularized by Marco Polo’s Book of Travels and the 1001 Nights tales, of Abd al-Rahman and Sindbad the Sailor. 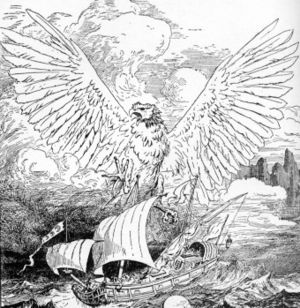 Roc destroying Sindbad's ship from The Book of Knowledge, The Grolier Society, 1911

"A bird of enormous size, bulky body and wide wings, flying in the air; and it was this that concealed the body of the sun and veiled it from the sun." In the account of Marko Polo the wingspan of the roc was 16 yards and the feathers 8 yards, its feathers were as big as palm leaves. The wind was the rush of its wings and its flight was lightning. The bird is usually described as being white. The egg of the roc is said to be over 50 yards in circumference. The Roc could carry an elephant in its claws which it would kill by flying to a great height then dropping the unfortunate creature to crash to its death on the rocks below. According to Arabic tradition, the Roc never lands on earth, only on the mountain Qaf, the center of the world.

In later times the home of the bird was sought in the region of Madagascar, whence gigantic fronds of the raffia palm very like a quill in form appear to have been brought to the Great Khan under the name of roc's feathers - Yule's Marco Polo, bk. iii. ch. 33, and Academy, 1884, No. 620.

Such a feather was brought to the Great Khan, and we read also of a gigantic stump of a roc's quill being brought to Spain by a merchant from the China seas (Abu Hamid of Spain, in Damiri).

The roc is hardly different from the Middle-Eastern `anqa "عنقاء" (see phoenix); it is also identified with the Persian simurgh, the bird which figures in Firdausi's epic as the foster-father of the hero Zal, father of Rustam.

There are four stories about the roc in the Arabian Nights, two involving Abd al-Rahman, and two involving Sinbad. In one story involving Sinbad, the roc unknowingly carries Sinbad to safety after a shipwreck. Sinbad was then stranded in a Roc’s nest on top of a mountain where he found an egg as large as 148 hen’s eggs. When the adult bird returned to its nest, Sinbad left his confinement by lashing himself to the Roc’s leg with his turban, without the bird even noticing him. He flew with it so high into the sky that he lost sight of earth. Eventually, he was able to escape when the Roc flew near another island. In the other story involving Sinbad, and in one of the Abd al-Rahman stories rocs destroy ships by dropping boulders on them.

Going farther back into Persian antiquity, there is an immortal bird, amrzs, or (in the Minoi-khiradh) slnamurv, which shakes the ripe fruit from the mythical tree that bears the seed of all useful things. Sinmartt and simurgh seem to be the same word. In Indian legend the garuda on which Vishnu rides is the king of birds (Theodor Benfey, Panchatantra, 98). In the Pahlavi translation of the Indian story as represented by the Syrian Kalilag and Damnag (ed. Gustav Bickell, 1876), the simurgh takes the place of the garuda, while Ibn al-Molaffa (Calila et Dimna, ed. Silvestre de Sacy, p. 126) speaks instead of the `anl~a. The later Syriac, curiously enough, has behemoth -- apparently the behemoth of Job transformed into a bird. The Ziz of Jewish tradition and the Thunderbird of Native American tradition are also giant birds.

The origin of the myth of the roc lies in extrapolations of the witnessed power of the eagle that could carry away a newborn lamb; references to the roc are found as early as the 8th century from Middle-Eastern authors.

It is possible that the myth originated from exaggerated accounts of an actual bird, perhaps the enormous Aepyornis or elephant bird of Madagascar, an extinct three-meter tall flightless bird. One theory is that the existence of rocs was postulated from the sight of an ostrich, which because of its flightlessness and unusual appearance, was mistaken for the chick of a presumably much larger species. There are reported sightings of the roc as recently as the 16th century by an English traveller who visited the Indian Ocean.

Through the sixteenth century the existence of the roc was accepted by Europeans. In 1604 Michael Drayton envisaged the rocs being taken aboard the Ark:

All feathered things yet ever knowne to men,
From the huge Rucke, unto the little Wren;
From Forrest, Fields, from Rivers and from Pons,
All that have webs, or cloven-footed ones;
To the Grand Arke, together friendly came,
Whose severall species were too long to name.

Another theory suggests that the roc was inspired by a bird-like form that is seen within the sun's corona during some total solar eclipses. Eclipsologists Elmer G. Suhr and Robin Edgar have identified this gigantic coronal "Bird of the Sun" as the source of inspiration for the mythical phoenix bird and most if not all other mythical birds that are closely associated with the sun. This total solar eclipse theory is supported by the fact that the roc is described as being white (the color of the sun's corona) and is described in the 'Arabian Nights' as, "A bird of enormous size, bulky body (possibly the darkened moon) and wide wings (possibly the corona's equatorial streamers), flying in the air; and it was this that concealed the body of the sun and veiled it from the sun. (a total solar eclipse)"