In Slavic mythology, a rusalka was a female ghost, water nymph, succubus or mermaid-like that dwelled in a lake. She was considered a being of the unclean force or нечистая сила (nechistaya sila). 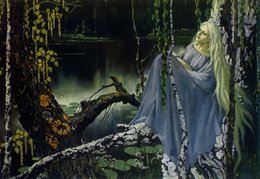 Though in some versions of the myth, the eyes shine like green fire, others describe them as extremely pale, with no visible pupils, such as in the famous Ivan Bilibin drawing. Her hair is sometimes depicted as green, and often perpetually wet.

They are called "Queen of Fairies", and it is said that only witches dare to swim with rusalki.

In some tales, they become Sky Women when they return from the waters.

Another Polish tradition considers rusalki tree spirits which could be found on nights when there was a new moon, dancing in open places in the forests of Poland.

In Ukraine rusalki were fish-women, who lived at the bottom of rivers. In the middle of the night, they would walk out to the bank and dance in meadows. If they saw beautiful men, they would fascinate them with songs & dancing, mesmirise them, then lead the person away to the river floor, to live with them.

Rusalki like to seduce men. They can do so by enticing men with their singing and then drowning them. Men seduced by the rusalka could die in her arms, and in some versions her laugh could also cause death (compare with the Irish banshee). She corresponds to the Scandinavian and ethnic German Nix.

According to some legends, should the rusalka's hair dry out, she will die.

In Polish mythology, rusalki dwell in the waters from fall to spring; in some traditions, they reside in the waters from summer to fall. While her primary dwelling place was the body of water in which she died, the rusalka could come out of the water at night, climb a tree, and sit there singing songs, sit on a dock and comb her hair, or join other rusalki in circle dances (хороводы, khorovody) in the field.

In lakeside leafy groves a friar

Escaped the world; out there he passed

His summer days in constant prayer,

Already with a humble shovel

The elder dug himself a grave;

And calling saints to bless his hovel,

Death, nothing other, did he crave.

So once upon a falling night he

Bowed down beside his droopy shack

And meekly prayed to the Almighty.

The grove was turning slowly black;

Above the lake a mist was lifting;

Through milky clouds across the sky

The ruddy moon was softly drifting,

When water drew the friar's eye...

He looks there, puzzled, full of trouble,

A fear he cannot quite explain,

And sees: the waves begin to bubble

Then -- white as first snow in the highlands,

There comes ashore and sits in silence

Upon the bank a naked maid.

She eyes the monk and brushes gently

Her hair and water off her arms.

He shakes with fear and looks intently

At her and at her lovely charms.

With eager hands she waves and beckons,

Then -- shoots within two flashing seconds

The glum old man slept not an instant

All night, all day not once he prayed:

Before his eyes still hung and glistened

The grove puts on the gown of nightfall;

The moon walks on the cloudy floor;

And there's the maiden, pale, delightful,

Reclining on the spellbound shore.

She looks at him, her hair she brushes,

Plays with the waves -- caresses, splashes, --

Then -- vanishes in limpid water...

And all is silent instantly...

On the third day the ardent hermit

Was sitting by the shore, in love,

As shade was lying on the grove...

Dark ceded to the sun's emergence;

By then the monk had disappeared,

No one knew where, and only urchins,

While swimming, saw a hoary beard.

Translated by Genia Gurarie, summer of 1995.

In most versions, the rusalka is an unquiet dead being. According to Zelenin, people who die violently and before their time, such as young women who commit suicide because they have been jilted by their lovers, or unmarried women who are pregnant out of wedlock, must live out their designated time on earth (срок, srok) as a spirit. (Under this theory male unclean dead were said to become vodianoi)

Rusalki can also come from unbaptized children, often those who were born out of wedlock and drowned by their mothers for that reason. Baby rusalki supposedly wander the forest begging to be baptized so that they can have peace. They are not necessarily innocent, however, and can attack a human foolish enough to approach them.

The ghostly version is the soul of a young woman who had died in or near a lake (many of these rusalki had been murdered by lovers) and came to haunt that lake; this undead rusalka is not invariably malevolent, and will be allowed to die in peace if her death is avenged.

The rusalka makes an appearance in 'Quest for Glory IV: Shadows of Darkness', an adventure game by Sierra On-Line.