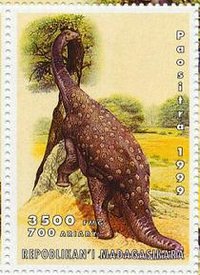 Saltasaurus was a small sauropod from the late cretaceous period, it's name means lizard from salta. Saltasaurus is designated by it's diplodocid type head and blunt teeth onl y at the back of the mouth. It was the first fossil discovered with tiny bone plates within it's skin. This form of armour has been later found in a variety of other titanosaurids. They resemble the same plates found on the ankylsaurus

Saltasaurus was first found by José Bonaparte and Jaime E. Powell in 1980. It was estimated to be 39 feet and possibly weighing in at 8 tons. Being a sauropod, it would have been strictly and herbivore and believed to have been able to raise up on it's hind legs to reach high branches. It's name is taken from a region in the north west of Argentina, where it was first found, but more fossils have been found in Uruguay. There is only one species of this dinosaur known, to date.

During the cretaceous period, many sauropods were losing their dominance in North America. The duck billed dinosaurs like the edmontosaurus were gaining a larger number as the older sauropods died out. However at this time, South America was and island that prevented the duck bils were never able to catch up and so the larger titanosaurids were able to continue evolving. The saltasaurus was one of the higher evolved sauropods that lived 70 to 65 million years ago. Like many recent discoveries of dinosaurs, the saltasaurus resulted in paleontologists to change many previously held assumptions about sauropods as a group. Saltosaurus was clearly a sauropod but until it was found, it was not known they had armour plating. It was believed that it's size would be enough to protect it from any attacks. This was further suggested when another saltasaurus was discovered with bony knobs that were 4-5 inches in diameter. paleontoligists now realized that many other sauropods may have had this armour, like the laplatasaurus, also found in Argentina.

In 1997 Luis Chiappe was working with a team near Auca Mahuevo in Patagonia, Argentina and uncovered a large titansaur nesting ground. Their eggs were amazingly small for such large creature, measuring 4-5 inches in diameter. Additionally making this an exciting discovery, it was discovered the eggs held fossilised embryos with skin impressions, it's believed these would have belonged to a saltasaurus. The females would apparantly dig hole, lay their eggs and then bury them with dirt and vegetaion, much like modern crocodiles. This suggests herd behavior, which along with their armour would have been adequete defense against such predators as the abelisaurus.