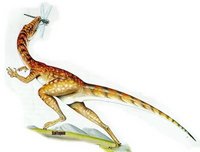 This debatable tiny dinosaur, is believed to be a tiny biped, roughly 23 inches long and was first discovered in Scotland, 1909.

It was probably the size of a small cat, it had hollow bones like a bird and probably weighed about 2 pounds. It had little five fingered hands, a long head with dozens of sharp teeth. Unfortunately not much is known about this tiny possible coelurosaur due to the only discoveries being mostly hind limb fragments, but it is considered to have been a carnivore that probably spent more time catching insects and scavenging it's food.

It's because of the scant fossils of this tiny creature that so little is really known, including what to specificially classify it as. Some think it may be a saurischian dinosaur, a few guess a more advanced theropod and closely related to the herrerasaurs. However it's taxonomy is in a constant state of dispute. Including suggestions that the fragments found may be a juvenile specimen of a larger theropod. While in 2000 it was suggested it may be a primitive dinsoaur form, more closely related to a lagosuchus.