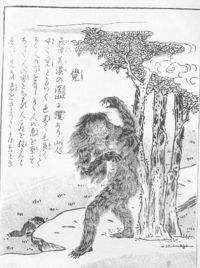 Satori (覚, lit. "consciousness") is a type of mountain-dwelling yōkai in Japanese folklore.

The creature is said to approach travellers on mountain paths in hominid form and speak their thoughts aloud. Once the victims become thoroughly confused and disoriented, the satori captures and eats them. The way to counter a satori is to empty one's mind, in which case the creature will grow bored and leave, run in fear, or even die.

The most famous satori, Omoi (おもい), lives at the base of Mount Fuji.