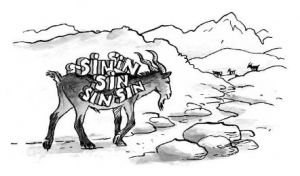 A scapegoat is a goat upon whose head are symbolically placed the sins of the people after which he is sent into the wilderness in the biblical ceremony for Yom Kippur.

The word "scapegoat" is a mistranslation of the word Azazel, the name for a fallen angel in the Book of Enoch. It is interesting to also note that in satanism a goat is used as a symbol for Satan. . The Septuagint, an early Greek translation of the Old Testament, had incorrectly translated Azazel as ez ozel – literally, "the goat that departs" – and translated the word as tragos apopompaios, meaning "goat sent out". The error was further promulgated in the Latin Vulgate, which rendered the word as caper emissarius, or "emissary goat". William Tyndale rendered the Latin as "(e)scape goat" in his 1530 Bible. This translation was later appropriated in the King James Version of the Bible.

According to the tradition of the scapegoat, the evil or lower side of man can be transferred from him to an animal. In this process of removing disease or sin, the bad spirit is expelled from the human being and enters the form of some beast.

Today the word scapegoat has come to mean a person, often innocent, who is blamed and punished for the sins, crimes or sufferings of others, generally as a way of distracting attention from the real causes. A scapegoat may be a child, employee, peer, ethnic or religious group, or country.

A concept superficially similar to the biblical scapegoat is attested in two ritual texts in archives at Ebla of the 24th century BC. They were connected with ritual purifications on the occasion of the king's wedding. In them, a she-goat with a silver bracelet hung from her neck was driven forth into the wasteland of 'Alini'; "we" in the report of the ritual involves the whole community. Such 'elimination rites', in which an animal, without confession of sins, is the vehicle of evils (not sins) that are chased from the community are widely attested in the Ancient Near East.

The Ancient Greeks practiced a scapegoating rite in which a cripple or beggar or criminal (the pharmakos) was cast out of the community, either in response to a natural disaster (such as a plague, famine or an invasion) or in response to a calendrical crisis (such as the end of the year). The scholia refer to the pharmakos being killed, but many scholars reject this, and argue that the earliest evidence (the fragments of the iambic satirist Hipponax) only show the pharmakos being stoned, beaten and driven from the community.

The scapegoat was a goat that was designated la-aza'zeyl; either "for absolute removal" (Brown-Driver-Briggs Lexicon) or possibly "for Azazel" (some modern versions taking the term as a name) and outcast in the desert as part of the ceremonies of the Day of Atonement, that began during the Exodus with the original Tabernacle and continued through the times of the temples in Jerusalem. The rite is described in Leviticus 16.

Every day animals were sacrificed for the sins of Israel. But once a year on the Day of Atonement (Yom Kippur) a special service was held. It was to be on the 10th day of Tishri, coming on different days of our calendar. It came in the month of September to early October. The Day of Atonement was the only day of the year that the priest entered the holy of holies to make sin offerings for himself, his family, and the "assembly of Israel." After making these offerings, the nation’s sins were symbolically laid on the scapegoat and it was led out into the wilderness and released.

After completing his sin offering the High Priest was to take two goats provided from the Israelite community and he is to cast lots for them. The term scapegoat or Azazel depending on the Bible translation you are using is found three times in Scripture in Leviticus 16.

In Christian theology, the story of the scapegoat in Leviticus is interpreted as a symbolic prefiguration of the self-sacrifice of Jesus, who takes the sins of humanity on his own head, having been crucified on a cross outside the city by order of the high priests. (Also see John 1:29 and Hebrews Chps. 9-10)

Another Christian interpretation is that of the two goats in Leviticus (16:8 And Aaron shall cast lots upon the two goats; one lot for the LORD, and the other lot for the scapegoat. 9And Aaron shall bring the goat upon which the LORD's lot fell, and offer him for a sin offering. 10 But the goat, on which the lot fell to be the scapegoat, shall be presented alive before the LORD, to make an atonement with him, and to let him go for a scapegoat into the wilderness). The first goat represents Christ, whose blood was shed for the sins of the people; the second represents Satan, whose blood was not shed.

In India the scape-animal may be a pig, buffalo, a goat or a black cock.

In Tibet a human scapegoat, dressed in goat's skin, is kicked out of the community as soon as the people have confessed their sins, and wealthy Moors keep a wild boar in their stables as a vehicle for the evil spirits to enter into which might otherwise injure their horses.

The Kaffirs sometimes take a goat in the presence of a sick man and confess sins over him. Then a few drops of the patient's blood are allowed to fall on the animal's head and the sickness is thought to be transferred, the animal being turned loose over the veld.

The medicine-men of the Baganda races perform a similar operation, taking hold of the animal and tying upon it some herbs they have passed over the patient's body. Then the animal is driven away to waste land, and the sick man is supposed to recover. The Baganda people transmit the sins of a dead man to a calf, the animal being led three times round the bier and the hand of the dead man being placed on its head, by which act the calf takes upon itself the evil done by the deceased. Then the scape-goat is driven on to waste land, where it cannot contaminate anybody.

Scapegoating in its most brutal form was carried out in tribal communities of the ancient world, where a person not meeting the physical or spiritual criteria of the community was simply put to death.

Literary critic and philosopher Kenneth Burke first coined and described the expression "scapegoat mechanism" in his books Permanence and Change (1935), and A Grammar of Motives (1945). These works influenced some philosophical anthropologists, such as Ernest Becker and Rene Girard.

Girard developed the concept much more extensively as an interpretation of human culture. In Girard's view, it is humankind, not God, who has the problem with violence. Humans are driven by desire for that which another has or wants (mimetic desire). This causes a triangulation of desire and results in conflict between the desiring parties. This mimetic contagion increases to a point where society is at risk; it is at this point that the scapegoat mechanism is triggered. This is the point where one person is singled out as the cause of the trouble and is expelled or killed by the group. This person is the scapegoat.

Social order is restored as people are contented that they have solved the cause of their problems by removing the scapegoated individual, and the cycle begins again. The keyword here is "content", scapegoating serves as a psychological relief for a group of people. Girard contends that this is what happened in the case of Jesus.

The difference in this case, Girard believes, is that he was resurrected from the dead and shown to be innocent; humanity is thus made aware of its violent tendencies and the cycle is broken. Satan, who is seen to be manifested in the contagion, is cast out. Thus Girard's work is significant as a re-construction of the Christus Victor atonement theory.