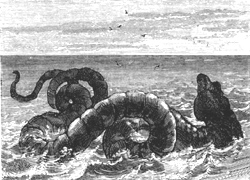 In Greek mythology, Scylla, or Skylla (Greek Σκύλλα) was a name shared by two characters, a female sea monster and a princess.

Scylla is one of the two sea monsters in Greek mythology (the other being Charybdis) which lives on one side of a narrow channel of water. The two sides of the strait are within an arrow's range of each other, so close that sailors attempting to avoid Charybdis will pass too close to Scylla and vice versa. The phrase between Scylla and Charybdis has come to mean being in a state where one is between two dangers and moving away from one will cause you to be in danger from the other. Traditionally the aforementioned strait has been associated with the Strait of Messina between Italy and Sicily but more recently this theory has been challenged and the alternative location of Cape Skilla in north west Greece suggested. Scylla is a horribly grotesque sea monster, with six long necks equipped with grisly heads, each of which contained three rows of sharp teeth. Her body consisted of twelve canine legs and a fish's tail. She was one of the children of Phorcys and either Hecate, Crataeis, Lamia or Ceto (where Scylla would also be known as one of the Phorcydes).

In Homer's Odyssey, Odysseus is given advice by Circe to sail closer to Scylla, for Charybdis could drown his whole ship. Odysseus then successfully navigates his ship past Scylla and Charybdis, but Scylla manages to catch six of his men, devouring them alive.

Scylla was a nymph, daughter of Phorcys. The fisherman-turned-sea-god Glaucus fell madly in love with her, but she fled from him onto the land where he could not follow. Despair filled his heart. He went to the sorceress Circe to ask for a love potion to melt Scylla's heart. As he told his tale of love to Circe, she herself fell in love with him. She wooed him with her sweetest words and looks, but the sea-god would have none of her. Circe was furiously angry, but with Scylla and not with Glaucus. She prepared a vial of very powerful poison and poured it in the pool where Scylla bathed. As soon as the nymph entered the water she was transformed into a frightful monster with twelve feet and six heads, each with three rows of teeth. She stood there in utter misery, unable to move, loathing and destroying everything that came into her reach, a peril to all sailors who passed near her. Whenever a ship passed, each of her heads would seize one of the crew. 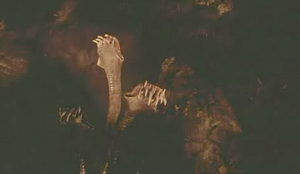 Circe was enraged by Glaucus' refusal, and turned her anger on the girl whom he loved. She went and poisoned the water which Scylla used to bathe with her magical herbs. When Scylla waded into the water, six dogs' heads emerged from her torso, devouring anyone who came near her, beyond her control. Scylla fled to the shore of the strait to live there alone in misery.

Scylla and Charybdis are believed to have been the entities from which the term, "Between a rock and a hard place" (ie: a difficult place) originated.