The sea monk, or sometimes monk-fish, was the name given to a sea animal found off the coast of Denmark almost certainly in 1546.[1] At this time it was regarded to be a sea monster and described as a "fish" that looked superficially like a monk. 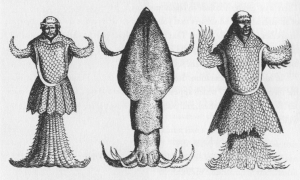 "Seas have (as well as skies) Sun, Moon, and Stars;
(As well as ayre) Swallows, and Rooks, and Stares;
(As well as earth) Vines, Roses, Nettles, Millions,
Pinks, Gilliflowers, Mushrooms, and many millions
of other Plants lants (more rare and strange than these)
As very fishes living in the Seas.
And also Rams, Calfs, Horses, Hares, and Hogs,
Wolves, Lions, Urchins, Elephants and Dogs,
Yea, Men and Mayds; and (which I more admire)
The mytred Bishop and the cowled Fryer;
Whereof, examples, (but a few years since)
Were shew'n the Norways, and Polonian Prince."

The sea monk was mentioned and pictured in the fourth volume of Conrad Gesner's famous Historia Animalium. Gesner also referenced a similar monster found in the Firth of Forth, according to Boethius, and a sighting off the coast of Poland in 1531.

In the early 1850s[2] , Danish zoologist Japetus Steenstrup suggested that the sea-monk was a giant squid, a theory more recently popularised by writer Richard Ellis.[3] Cryptozoologist Bernard Heuvelmans[4] , believed the report was based on the discovery of an errant walrus. More recently.[5] it has been suggested that it was an angel shark Squatina squatina, which is commonly called monkfish in English or munk in Norwegian. Other suggested suspects for the sea monk include a grey seal, a hooded seal, a monk seal, or a Jenny Hanniver.[6]

A monster called a "sea monk" also appears in some fantasy-based computer and card games, such as Lost Kingdoms II and Final Fantasy XI.

Part of this article consists of modified text from Wikipedia, and the article is therefore licensed under GFDL.
Retrieved from "https://www.monstropedia.org/index.php?title=Sea_monk&oldid=9976"
Categories: