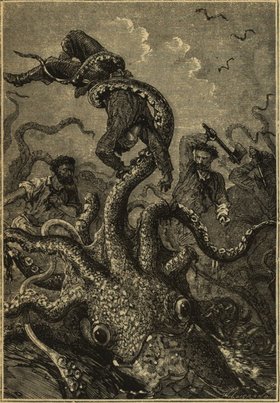 Sea monsters are sea-dwelling, mythical or legendary creatures, often believed to be of immense size.

Marine monsters can take many forms, including sea dragons, sea serpents, or multi-armed beasts; they can be slimy or scaly, often spouting jets of water. Often they are pictured threatening ships and boats.

Historically, decorative, but exaggerated, drawings of heraldic dolphins and sea monsters were frequently used to illustrate maps, such as the Carta marina. This practice died away with the advent of modern cartography. Nevertheless, stories of sea monsters and eyewitness accounts which claim to have seen these beasts persist to this day. Such sightings are often catalogued and studied by folklorists and cryptozoologists.

Sea monster accounts are found in virtually all cultures that have contact with the sea. Eyewitness accounts come from all over the world. For example, Avienus relates of Carthaginian explorer Himilco's voyage "...there monsters of the deep, and beasts swim amid the slow and sluggishly crawling ships." (lines 117-29 of Ora Maritima). Sir Humphrey Gilbert claimed to have encountered a lion-like monster with "glaring eyes" on his return voyage after formerly claiming St. John's, Newfoundland (1583) for England. Another account of an encounter with a sea monster comes from July 1734. Hans Egede, a Danish/Norwegian missionary reported that on a voyage to Gothaab/Nuuk on the western coast of Greenland:

[There] appeared a very terrible sea-animal, which raised itself so high above the water, that its head reached above our maintop. It had a long, sharp snout, and blew like a whale, had broad, large flippers, and the body was, as it were, covered with hard skin, and it was very wrinkled and uneven on its skin; moreover, on the lower part it was formed like a snake, and when it went under water again, it cast itself backwards, and in doing so, it raised its tail above the water, a whole ship length from its body. That evening, we had very bad weather.

Other reports are known from the Pacific, Indian and Southern Oceans (e.g. see Heuvelmans 1968).

A more recent development has been the mysterious "Bloop" picked up by hydrophonic equipment since 1997. While matching the audio characteristics of an animal, it is too large to be a whale. Investigations thus far have been inconclusive.

It is debatable what these modern "monsters" might be. Possibilities include frilled shark, basking shark, oarfish, giant squid, seiches, or whales. For example Ellis (1999) suggested the Egede monster might have been a giant squid. Other hypotheses are that modern-day monsters are surviving specimens of giant marine reptiles, such as ichthyosaur or plesiosaur, from the Jurassic and Cretaceous Periods, or extinct whales like Basilosaurus.

In 1892, Anthonid Cornelis Oudemans, then director of the Royal Zoological Gardens at The Hague saw the publication of his The Great Sea Serpent which suggested that many sea serpent reports were best accounted for as a previously unknown giant, long-necked pinniped.

It is likely that many other reports of sea monsters are misinterpreted sightings of shark and whale carcasses (see below), floating kelp, logs or other flotsam such as abandoned rafts, canoes and fishing nets. 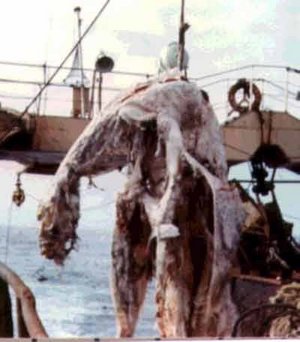 The carcass netted by the Zuiyo Maru

Sea monster corpses have been reported since antiquity (Heuvelmans 1968). The alleged plesiosaur netted by the Japanese trawler Zuiyo Maru off New Zealand caused a sensation in 1977 and was immortalized on a Japanese postage stamp before it was suggested to be the decomposing carcass of a basking shark. Likewise, DNA testing confirmed that an alleged sea monster washed up on Fortune Bay, Newfoundland in August, 2001, was a sperm whale.

Another modern example of a "sea monster" was the strange creature washed up on the Chilean sea shore in July, 2003. It was first described as a "mammoth jellyfish as long as a bus" but was later determined to be another corpse of a sperm whale. Such unidentified carcasses are often called globsters. Cases of boneless, amorphic globsters are sometimes believed to be gigantic octopuses, but it has now been determined that sperm whales dying at sea decompose in such a way that the blubber detaches from the body, forming featureless whitish masses that sometimes exhibit a hairy texture due to exposed strands of collagen fibers. The analysis of the Zuiyo Maru carcass revealed a comparable phenomenon in decomposing basking shark carcasses, which lose most of the lower head area and the dorsal and caudal fins first, making them resemble a plesiosaur.